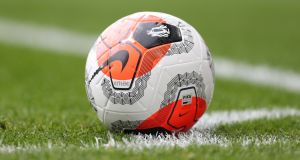 Premier League players taking a 30 per cent salary cut would lead to the government losing out on in excess of £200million (€230m) in tax revenues, the PFA has warned. Photograph: Alex Morton/Getty

Premier League players taking a 30 per cent salary cut would lead to the government losing out on in excess of £200million (€230m) in tax revenues, the Professional Footballers’ Association has warned.

On Saturday afternoon, the Premier League discussed its suggested wage deductions or deferrals strategy as it gets to grips with the coronavirus crisis with all clubs, the PFA and League Managers Association via conference call.

Premier League players have been coming under increasing pressure to take a drop in pay, an issue that has become a hot topic since top-flight clubs started placing some non-playing staff on the government’s furlough scheme.

Health Secretary Matt Hancock weighed into the debate during the government’s daily briefing on Thursday, telling Premier League players they should “take a pay cut and play their part”.

While the PFA insists its members want to make “significant financial contributions”, the players’ union warned the government the Premier League’s suggested 30 per cent cut of an annual remuneration amounts to £500m, of which around 40 per cent would be contributed to tax.

“Going forward, we are working together to find a solution which will be continually reviewed in order to assess the circumstance of the COVID-19 crisis.

“The players are mindful that as PAYE employees, the combined tax on their salaries is a significant contribution to funding essential public services — which are especially critical at this time.

“Taking a 30 per cent salary deduction will cost the Exchequer substantial sums. This would be detrimental to our NHS and other government-funded services.

“The proposed 30 per cent salary deduction over a 12-month period equates to over £500m in wage reductions and a loss in tax contributions of over £200m to the government.

“What effect does this loss of earning to the government mean for the NHS? Was this considered in the Premier League proposal and did the Health Secretary, Matt Hancock factor this in when asking players to take a salary cut?”