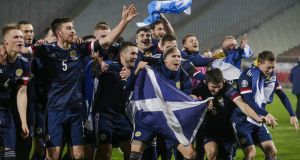 They did it the hard way but Scotland held their nerve in a penalty shootout to reach their first major finals since the 1998 World Cup in France.

As torrential rain cascaded down on Belgrade, Scotland looked instantly at home, initially dominating possession to such an extent that Serbia had reason for relief their 50,000 capacity stadium was virtually empty.

Reactive rather than remotely proactive, the hosts looked sluggish and strangely off the pace. Yet although their cause was not helped by the stray arm thrust into the face of John McGinn which earned Nikola Milenkovic a booking and ensured the left sided component of Serbia’s back three needed to watch his step, Aleksandar Mitrovic looked capable of ruffling the visiting assurance.

The Fulham centre-forward’s aerial prowess was already causing problems when Mitrovic held the ball up superbly before cueing up Sasa Lukic for a low drive which flew fractionally wide of David Marshall’s left hand post.

It swiftly became apparent that Motherwell’s Declan Gallagher, deployed at the heart of Clarke’s own back three, was destined to prove a key figure in one of the night’s principal sub-plots, namely his duel with Mitrovic. Clarke cannot have been overly delighted when, with half time beckoning and Gallagher standing impressively firm, the defender collected the softest of bookings.

Another potentially match defining sphere was the left side of Serbia’s defence where Filip Kostic appeared so dedicated to marauding forward on the counterattack that Lyndon Dykes and Christie were offered plenty of highly inviting space to explore.

Clarke’s only disappointment was that, much as they and McGinn succeeded in fazing their markers, they had limited success in properly exploiting the resultant defensive gaps. Indeed Predrag Rajkovic was rarely over-exerted, the home goalkeeper saving comfortably when Christie directed a potentially dangerous free-kick far to close to him and, then again, when McGinn aimed a shot straight at his throat. How Scotland could have done with the injured Newcastle United winger, Ryan Fraser, in that front three.

More positively, they were at least keeping Serbia’s habitual danger man, Sergej Milinkovic-Savic, uncommonly quiet. The Lazio creator struggled to sprinkle his customary stardust on proceedings as he drifted, frequently fairly aimlessly, between the lines.

Clarke must have been reassured that, flanking Gallagher, Manchester United’s Scott McTominay and Arsenal’s Kieran Tierney, afforded his side considerable defensive stability as the stutter in Serbia’s creative step perhaps explained why they had won only one of their last six home games.

This impression was reinforced early in the second half as Dykes - revelling in bullying his supposed minders - held the ball up adroitly for Liverpool’s Andy Robertson to advance from left wing-back and miss the best chance of the evening.

Robertson looked set to score but, somehow, miscued horribly, sending the ball ballooning over the bar.

No matter; Christie swiftly put things right for Clarke courtesy of a wonderful finish. His goal began with Callum McGregor seizing on a Serbian concession of possession and feeding Christie.

All that remained was for the Celtic forward to swivel superbly and feint to complete a one two but instead shoot through a heavily congested penalty area. With teammates selflessly distracting defenders, the ball flew goalwards, brushing the inside of a post on its journey across the line.

Now Serbia needed to raise the home tone - not to mention their strangely under-powered tempo.

Yet try as they might, Clarke’s players kept on throwing obstacles in their way. Granted Milinkovic-Savic unleashed a header which flew far too close to the target for comfort but Gallagher contributed an important, possibly goal preventing, block on Mitrovic as the striker shaped to shoot.

In between such scares - and Serbia did start to win a few corners - a tiring Scotland even threatened to extend their lead. McTominay headed inches wide following a corner, McGregor went close from 25 yards and the industrious, and influential, McGinn created a decent opening Christie could not quite make the most of. When Jovic proved similarly unable to polish off Mladenovic’s clever late home cross it felt as if Scotland were set fair to end 23 years of hurt. But Jovic was not quite done and in the 90th minute the substitute connected with another fine delivery from the same creator and, this time, dodged McTominay before dispatched a classic downward header which evaded Marshall’s grasp and condemned Scotland fans to the agony of extra time.

Suddenly Clarke’s players were alarmingly leggy and seriously up against it. Mitrovic saw a shot deflected wide and only a sublime save on Marshall’s part prevented Nemanja Gudelj from shooting Serbia ahead. The Derby goalkeeper performed acrobatic wonders to tip that high velocity effort round a post but it turned out he was simply warming up for the main event - saving Mitrovic’s penalty. - Guardian