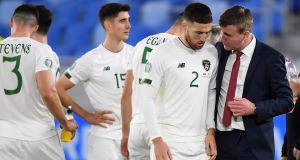 Stephen Kenny: his Republic of Ireland side looked the better team for long periods but over 120 minutes they could not find the net. Photograph: Alexander Hassenstein/Getty Images

Thirty years after the penalty shootout that transformed the country into a state of delirium, the Republic of Ireland soccer team endured a ghost version of that event on Thursday night in Slovakia.

The landmark anniversary of Italia ’90 and the footage that plays out like a classic Hollywood clip by now – Bonner’s powerful, big-pawed save, O’Leary’s nonchalant conversion, the bedlam – also marked the year that Jack Charlton, the architect of that moment in Genoa, passed away at the age of 85.

How different it all was on Thursday evening, with the shouts of the players echoing around the deserted stadium in Bratislava and an Ireland team producing its most football-laden performance in several years without any fans there to witness it. And it all came down to penalties.

The immediate prize – a visit to Windsor Park in November to play Northern Ireland – was something to look forward to in this dreaded winter. The ultimate prize of a place in the European Championships in Dublin next summer was at once fabulous and hard to fully believe in, now that the capital city is empty and international travel has all but ceased and the virus seems set to rage again.

As with all of sport right now, there was a true sense of make-believe about Ireland versus Slovakia. But the fans got the beers in and lit the fire and were willing to give it a go.

People adapt to anything and even as the public began to decipher the ostensibly puzzling decision by Stephen Kenny to select James McClean in an outright attacking position, the true reason gradually became evident even before his post-match interview. Both Aaron Connolly and Adam Idah, while fine, had been caught up in the regulations pertaining to Covid-19 after two non-playing members of staff had tested positive for the virus on the eve of the game.

The rules, Kenny explained to Sky Sports after the match, are “much more stringent” in Ireland. Had they been in the UK, they would have “been perfectly entitled to play”. Under Irish rules, they were out.

Kenny had no choice but to remain sanguine and accept the situation. For fans, it was tempting to retrospectively imagine the suddenly-vanished Connolly storming through the hapless Slovaks, confidently banging home those chances engineered by Ireland’s thoughtful and expansive attacking play.

We can only imagine the kind of magnificent tantrum Charlton would have thrown if, in a parallel world, he was confronted with this situation. The idea of a medical person – or any official – telling Big Jack who he could or couldn’t put in his team would have been an assault on pretty much every value he held dear. He would have turned contrary. Fine me! Throw me in jail! I don’t care. Ahm picken the layd. But those were different times: a normal world. Kenny had no choice but to accept the situation.

One of the reasons to look forward to Thursday night’s game was that it was an escape from reality; a temporary reprieve from the constant and vital onslaught of news and direction on social distancing and tensions between Government and Nphet.

The last thing anyone expected was for the HSE to somehow indirectly influence the most important team selection of Stephen Kenny’s budding international career.

On the face of it, the whole thing was bizarre. The information was so vague that those of us watching the game on television could easily conjure a hazy picture of Sam McConkey himself crouched down and measuring the relevant seats on the team aeroplane and immediately afterwards telling a crestfallen Kenny that Connolly, the star man, would have to sit this one out; that if he played on Thursday, half of Bratislava would be down with the virus on Friday.

Of course the reality was nothing like that. Presumably the players had been sitting within the regulation two-metres on the plane journey to Slovakia. How had this been allowed to happen?

And if, as their statement suggests, the FAI contacted the HSE for direction and were duly furnished with the Irish mandatory two-metres distance advice, then why did they appeal that? What form did the appeal take? Was it a kind of desperate plea: “ah, c’mon, its only a third of a metre and Connolly’s been on fire?”

And were the HSE supposed to say: go on so, but don’t do it again. After the combination of disbelief and merriment and dismay that greeted the myriad tales and yarns contained with the Champagne Football expose, wasn’t it beholden on everyone within the FAI to make sure that this trip was free of any point of controversy; that everything be done by,well . . . the book?

So what a chaotic backdrop against which Kenny had to send out his team to play. Even so, Ireland played plenty of creative, encouraging football – albeit against an ordinary side missing several of their best players and without the help of their raucous home support.

Kenny’s vision and ambition was immediately evident. They looked the better side and were enjoyable to watch and easy to root for. But. They had 120 minutes in which to score a goal and couldn’t do so. The familiar absence of a knacky, instinctive goal getter hurt the Irish again. The Republic of Ireland could not score.

The problem with international soccer is that there is never a better time than now. The cold form line on Stephen Kenny’s period in charge is one draw and two defeats from three games. It tells nothing of the real story but on the win-loss ledger, that’s irrelevant. Ireland miss out narrowly, then, on the promise of a beautiful summer. It’s the old cliché: a few inches can make all the difference. Just ask Aaron Connolly.