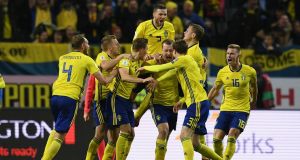 Italy must beat Sweden at San Siro on Monday to have any hope of qualifying for the World Cup in Russia after Jakob Johansson condemned the Azzurri to a 1-0 first-leg defeat in Stockholm.

The four-time world champions risk missing out on the summer finals for the first time since 1958 and this playoff result piles further pressure on a side who struggled throughout the qualifying campaign.

Johansson’s second-half winner was helped into the net by the unfortunate Daniele De Rossi but Sweden will not mind one bit as they now have the upper hand ahead of the crucial fixture in Milan.

Under no illusions about the strength of Italy’s determination to avoid the ignominy of failing to reach the World Cup for the first time in 60 years, Sweden kicked off in a suitably serious mood.

There would be no sharing of the home comforts at the Friends Arena as Ola Toivonen gave Leonardo Bonucci some early bother with an elbow that left the AC Milan defender writhing in pain.

With Sweden pressing hard, tricky winger Emil Forsberg fired a free-kick over the crossbar before Andrea Belotti fluffed a header at the other end.

Forsberg – a key element in RB Leipzig’s remarkable rise to the top of the Bundesliga – then cut inside to tee up Toivonen for a low effort that just skimmed Gianluigi Buffon’s far post.

Italy steadily got to grips with Sweden’s physical approach and began creating chances of their own, Matteo Darmian finding Antonio Candreva only for the Inter Milan schemer to come up short.

Sweden had the last word before the break. Marcus Berg read Giorgio Chiellini’s movement well to put Buffon in difficulty, but the 39-year-old goalkeeper was able to clear under heavy pressure.

His counterpart Robin Olsen was called into action following the restart as Candreva and Marco Parolo tested his reflexes but, just after the hour mark, it was Sweden who struck the opener.

Johansson, on as a substitute for Albin Ekdal, strode into the Italy box to put his foot through a headed lay-off. The ball veered past Buffon thanks in part to a helpful deflection off De Rossi.

Italy were laid low, briefly, but responded positively to the goal as Manchester United full back Darmian hit a post with a long-range effort.

The Azzurri would enjoy plenty of the ball as time ticked away, but their head coach Giampiero Ventura could not conjure a tactical switch that changed the outcome in the Swedish capital.

1 ‘Manchester United are lucky to have you’: Klopp responds to Donegal schoolboy’s letter
2 Iain Henderson ruled out of Ireland’s Twickenham visit
3 United greats in attendance as club hero Gregg laid to rest
4 Six Nations: Ireland v England all you need to know guide
5 Eddie Jones: back three will deal with Irish aerial threat
Real news has value SUBSCRIBE
Crossword Get access to over 6,000 interactive crosswords