World Cup playoff: Ireland will give Denmark pause for thought

Ireland expects: “We are ready. We have done our homework and are prepared” 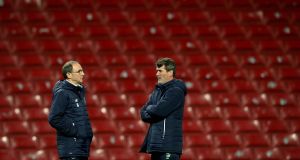 There was a telling moment during Martin O’Neill’s eve-of-match thoughts as darkness closed in and the rain fell and the Friday-night office exodus gathered pace in Copenhagen. The Irish manager was asked, with Scandinavian directness, if he agreed that, player for player, Denmark had more ‘class’ than his Ireland team. There followed the famous O’Neill pause. Then the fierce concentration as he rooted around in that vast compartment of diplomatic responses.

“I think they have some fine players,” he said carefully. “And so have we.”

As a preview of the local expectation of Saturday night’s playoff, that pause carried it all. There is an overwhelming sense that Ireland have come here to inflict some grievous crime against football, that the occasion could be a case for Sarah Lund and the other detectives of The Killing. Who wouldn’t be fearful of Ireland, a side that is not so much an example of being greater than the sum of its parts as presenting an algebraic riddle.

Two and a half thousand Ireland fans are here with tickets: it remains unclear how many more are pouring into the city in the hope of witnessing another famous night.

Åge Hareide and his players had only to review highlights of the Wales game to gauge how this occasion could turn horrible for them: all of Wales early brightness and invention gradually deteriorating in the face of Ireland’s relentlessness, then the departure of their talisman, an inevitable Ireland goal from nothing and finally 20 closing minutes of futile, long-ball attacking which the gargantuan centre-backs gobbled up. Little wonder that Hareide chose to flatter the emotional qualities of the Irish players rather than the intricacies of the game.

“The game plan is easy. They don’t change it up from game-to-game and you see the same style of play. But you also see the way they stick together and the team spirit so spread out through the team. They work well together.”

It will be tense from the first whistle in the Parken but Hareide’s natural affability prompted a charm offensive from the hosts as he recalled crashing in Martin O’Neill’s place in the less opulent days of English football when they were both playing for Norwich. “A very good lodger,” Hareide recalled. “And he was a very good landlord.” O’Neill nodded at the mention of his time showing the Dane how the immersion and oven worked.

“Since I was a better player, I was earning more money and Åge had no place to stay originally so he stayed with me. And I charged him very little rent,” he joked. “He was good. He didn’t use it that often. Just 23 hours out of the 24. No, he just stayed for a few weeks until he got his own place. He turned out to be an excellent player and I have kept in contact with him. Not every single year but he has an excellent reputation as a coach.”

This was in 1984-85, before the players they will coach tonight were even born. Both men belong to a rarefied group of survivors from that era of the English football. Winning this series of games would further their respective reputations. Hareide has said that a 0-0 draw would be acceptable, even if it’s not the spectacle that Denmark are hoping for.

“And then we have 120 minutes in Dublin to score a goal,” he added cheerfully.

It’s the usual mind games. But for O’Neill and Ireland there is a nagging sense that the best hope of emerging on top is to storm the citadel once again. Better to return to Dublin on Tuesday night with something to hold onto rather than something to create.

O’Neill’s team did that in the play-off against Bosnia and he would argue that they have become a different group since the night they conjured up that little-seen and much-celebrated goal in the fog in Zenica. That was exactly two years ago and O’Neill feels there obdurate streak has deepened since then.

“I think that the players have matured. I think there is a good belief in the camp that maybe didn’t exist a couple of seasons ago. A sort of inner self belief, anyway. It is not one that is flaunted or anything, but there is an inner self belief that we can come out and compete. We know we must compete for everything at any given minute. And while we know that every international side has limitations, somewhat, we are going to try and stay as strong as we can and play to our strengths, which is the most important thing. And use that experience of the last couple of games to good effect.”

Denmark’s chief goal sources are clearly identifiable: Christian Eriksen has been scoring for fun throughout this campaign, with Nicolai Jørgenson and Thomas Delaney also in sharp form for a team that is unabashed about what Eriksen described as their “quality and potential.”

To win this playoff, Ireland must score somewhere, somehow in winter time. Where the goal - plural may be too much like wishful thinking - comes from is a source of mystery. This would be a convenient time for Shane Long to break what has become a conspicuous drought. But the fact that Ireland’s predominant goal scoring threat hasn’t been scoring further advertises the difficulty of planning against them.

There is no glittering virtuoso like Eriksen, no lethal six-yard poacher to shut down. It’s just this bruising, whirlwind collective that has begun to materialise in Danish minds; an energy that needs somehow to be channelled and controlled. Robbie Brady, one of those Irish players with a flair for the big occasion gave a mirthless smile at the Danish assertion that if they can break the Irish spirit, they can win over the two nights.

“They can try. But we will see tomorrow night. We are ready. We have done our homework and are prepared. So we have to wait and see.”

Fair warning has been given.