FAI chief accused of reneging on promise to restore pay 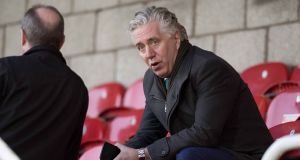 FAI chief executive John Delaney: staff members are angry at what they see is a firm promise of pay restoration being broken. Photograph: Morgan Treacy/Inpho

FAI staff members have accused the association’s chief executive John Delaney of reneging on repeated commitments to reverse pay cuts imposed on them in 2011 and 2012, at a time of acute financial difficulty for the organisation.

Those employed as development officers at the time had salaries of just over €40,000 cut first by 5 per cent in 2011, then by 10 per cent in 2012. Pension contributions and basic expenses such as mileage for employees often doing significant amount of travel were also affected.

In documents seen by The Irish Times, firm commitments were given that the prior levels of pay would be restored at some point. In the case of the 2012 pay cut, Delaney clearly stated that the reduction would only have to be endured for a period of 18 months.

Instead, in early 2014 he wrote to staff again, stating: “We have continued to trade through a very difficult economic climate since the introduction of these measures.” He committed, however, “to communicate to you by mid-March the position in relation to when the pay and pension contributions restoration will happen this year.”

The restoration did not happen that year, though, nor in any since. Staff did receive a 3 per cent pay rise in 2016, but ill feeling over the wider issue has endured. Delaney wrote to staff on Friday to inform them that the association’s board had now decided to offer them increases of 2.5 per cent in 2018 and 2019, although the latter is contingent, it seems, on the association achieving certain unspecified performance targets.

The association appears to be acting on a report delivered over the last few days by independent facilitators Peter McLoone and Ned O’Connor, who became involved in the dispute after Siptu had initially said that it intended to have the matter resolved at the Labour Court.

In addition to the two-stage 5 per cent rise, the pair suggest affected staff receive a one-off lump sum amounting to 5 per cent of annual salary “in full and final settlement” of other outstanding claims relating to the pay cuts. That, however, would mean that 7 per cent of the pay cuts would effectively not now be restored.

“All we are looking for is what we were promised,” says one affected member of staff. “Delaney is on record; it’s all there black and white. We were asked to help because the association was in a bad way and we did that, but we were promised the previous levels of pay would be restored. We just want that restoration.”

Around 90 development officers, many of them part-funded by local authorities or other sports- and youth-related organisations, are employed by the association. Those who have been there since the original cuts will have lost more than €30,000 in gross pay over the six years. Siptu members who are affected will be balloted on the association’s offer over the next couple of weeks.

There is clearly anger, though, at what was seen as a firm promise being broken despite the money received by Uefa for television rights and Euro 2016 qualification, and repeated claims in public by Delaney, whose own income has increased substantially as a result of his election to the European body’s executive committee, that the organisation is indeed in a far stronger position now.