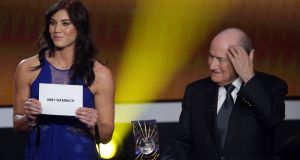 The former Fifa president Sepp Blatter has been accused by Hope Solo, the USA women’s football team goalkeeper, of having sexually assaulted her at Fifa’s Ballon d’Or awards ceremony in January 2013.

In an interview with the Portuguese newspaper Expresso, being published on Saturday, Solo, 36, claimed she “had Sepp Blatter grab my ass” at the glittering presentation of Fifa’s annual football awards for achievement during 2012.

Solo presented the Fifa women’s world player of the year award on stage alongside Blatter, to her colleague on the USA team that had won the gold medal at the London Olympics, the striker Abby Wambach.

Blatter, contacted via his spokesman, responded to Solo’s recollection by denying that the incident took place. “This allegation is ridiculous,” he said.

On the official Fifa film of the event, which was hosted by the Dutch football legend Ruud Gullit and the broadcaster Kay Murray, Solo was shown coming on to the stage with Blatter from behind a curtain at the back of the stage, to present the award to Wambach.

Expanding on the alleged incident on Friday, Solo told the Guardian that she had to compose herself immediately afterwards to concentrate on making her speech and giving the presentation to Wambach. “I was in shock and completely thrown off,” Solo said. “I had to quickly pull myself together to present my team-mate with the biggest award of her career and celebrate with her in that moment, so I completely shifted my focus to Abby.”

Solo, the most capped goalkeeper in US football history with 202 appearances, including in the 2008 and 2012 Olympic – and 2015 World Cup-winning teams, spoke out last month about sexual harassment in sport, following the revelations about the Hollywood producer Harvey Weinstein.

In an Instagram post Solo congratulated the women who had spoken out and wrote with the #MeToo hashtag: “For the past few days, I have been thinking about all the uncomfortable situations myself and/or my team-mates have experienced throughout the years with trainers, doctors, coaches, executives and even team-mates. From inappropriate comments, unwanted advances and grabs of the ass to coaches and [general managers] and even press officers speaking about players’ ‘tits’ and physical appearance, sexual harassment is rampant in the sports world. I always felt I’d ‘handled it’ and stood up for myself in those situations, but there were never any consequences for the perpetrators. That needs to change. Silence will not change the world!”

Solo expanded on those remarks to Expresso, when she appeared at the Web Summit event in Lisbon, to speak on a platform for equal pay and women’s equality. “For years, in the past, female players date and end up marrying their college coaches, which obviously a coach should not be doing, especially with a young player,” she said. “I’ve seen it not just with coaches. I’ve seen it with trainers, doctors and our press officers . . . I’ve seen it amongst players in the locker room. It’s rampant.

“I’m actually very disappointed with the women who haven’t spoken about it in the sports world – I wish more women, especially in football, would speak against it, about the experiences, because some of those people still work [in football].”

Asked why she had not spoken out about the Blatter incident before, Solo said she always tries to confront people directly, including team-mates, when it happens. With Blatter, she said as it happened seconds before she went on stage, she was unable to confront him, did not have an opportunity to do so when they left the stage and has never seen him since.

Blatter, 81, won five elections as president of Fifa from 1998 until 2015, until he was banned by the organisation for ethics breaches relating to a 2 million Swiss Francs payment made to the then Uefa president Michel Platini in 2011.

Over his years he faced criticism for a series of sexist remarks, including a suggestion in 2004 that female players could wear “tighter shorts” like “they do in volleyball” to make the game more appealing to a male audience. In 2013, he called a female candidate for Fifa’s executive committee “good, and good looking”. Days later, when congratulating the new female members of the executive committee, he said: “Are there ladies in the room? Say something! You are always speaking at home, now you can speak here.”

Solo has played for the US national team since 2000, although she has not appeared since last year’s Olympics in Rio because of a shoulder injury and a six-month suspension imposed by the US soccer federation. She was banned after accusing the Swedish team of a defensive performance and referring to them as “a bunch of cowards” after they beat USA in the quarter-finals, a comment she later retracted and apologised for.

She told the Guardian she believes sexual harassment in sport must be dealt with: “While in this instance it was Sepp Blatter, who was the most powerful man in football at the time, sexual harassment and inappropriate behaviour are rampant at every level in women’s sport and it needs to stop.” – Guardian service