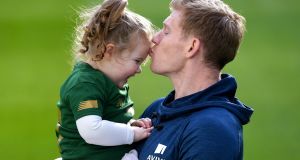 James McClean with his daughter Willow at the unveiling of Aviva’s new Sensory Hub. The initiative aims to make the Aviva Stadium a more inclusive space for people with additional sensory needs. The state-of-the-art sensory booth is free for any fan to use. Photograph: Sportsfile

James McClean says he is as happy to go to Bosnia as Belfast if that is what is required to get the Republic of Ireland to the European Championships. But he admits that members of his family would probably prefer Mick McCarthy’s side taking the more wayward play-off route given the grief he is like to get in the event that qualification comes down to another big night at Windsor Park.

Speaking at an event in the Aviva stadium to mark the opening of a “Sensory hub,” a facility, installed by the insurance company itself, that is aimed at supporting visitors to the stadium with sensory issues related to conditions like ADHD, dyspraxia or autism, the 30 year-old admitted that playing Northern Ireland would be “the more exciting option but I couldn’t care less to be honest.

“As long as we are qualified, it won’t matter. Someone might say that because of my situation it probably would (the most attractive prospect) but no, you don’t want side issue taking away from actual occasion. And if you ask my family they’d prefer Bosnia away, to be honest.

“For them it’s less hassle, less hassle in the build-up. For me, it (Northern Ireland) would the more exciting game but Bosnia away, the chance to qualify and to play two games here . . . I think that’s what matters most.”

McClean’s current form is certainly encouraging as the play-off games approach. He and Stoke City have been transformed since Northern Ireland manager Michael O’Neill took charge at the start of November.

“Yeah, obviously the form table shows that we are third or fourth since he has come in,” he says. “You could say that it’s probably a shame that he didn’t come in a little bit earlier; we could have been challenging for the automatic position if that was the case based on our form right now but it’s grand: it’s good, really good.

“We were rock bottom when he came in and we are now seven clear of the relegation zone with a superior goal difference. It’s great and the sooner we pull away from that drop zone and to safety the better. And then who knows.”

Asked about how it is that O’Neill has had such a dramatic impact, McClean says that it is primarily down to the belief he instils in his players and the team.

“He just breathes confidence into everybody,” he says. “He has changed the formation, spoken with a few of the players and like I say, breathed confidence into them. As a footballer, when you are confident, you feel like you can do anything. That confidence comes from winning games too and he has set us up to be hard to beat. So we’ve had a few wins, we are full of confidence and we don’t think that we can be beaten going into games. Long may it continue.

“He’s done a great job for the North and he’s doing a great job with us at the minute. You can see why . . . his attention to detail every day, it’s brilliant to see, it’s fascinating to see and it’s obviously working wonders.”

Asked if the potential for a play-off showdown comes up in conversation between the pair, he laughs. “No. I think the last international break he joked that if that was the case he would make me do another 20k in training that week but nah . . . I think that one is on the backburner, the back of both our minds. We’ll see when the thing comes around.”

The event at the Aviva was clearly of particular personal interest to McClean whose two year-old daughter is just the sort of child, he says, who might benefit from the initiative.

“My two eldest kids love coming to see me play, but for my youngest daughter Willow, it’s a different experience. She doesn’t like crowds, or any very busy or noisy places. Football games, which are such a huge part of our lives, are quite overwhelming for her. A facility like the Aviva Sensory Hub will make all the difference for her and many other people with sensory needs when coming to matches.”

1 Hugo Keenan and Will Connors to make Ireland debuts against Italy
2 Golf and tennis among a host of sports facing Level 5 lockdown
3 Golf in Level 5 Covid restrictions: Clubs still waiting to hear if they can remain open
4 Six Nations - Ireland v Italy: Kick-off time, TV details, team news, standings and more
5 Gordon D’Arcy: Ireland don’t need to do a Finn Russell on it
Real news has value SUBSCRIBE
Crossword Get access to over 6,000 interactive crosswords