Manchester City playmaker had been given time off for personal reasons 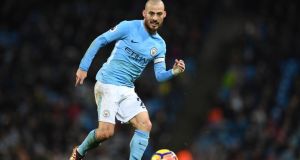 David Silva has taken time off after his son was born prematurely. Photograph: Paul Ellis/AFP

Manchester City playmaker David Silva has announced his son is “fighting day by day” after being born prematurely.

Silva missed four of City’s five games prior to Tuesday’s Premier League win over Watford for what the club said were personal reasons.

The Spaniard posted a message on Twitter on Wednesday, which said: “I want to thank all of you for the love and good wishes received in the last few weeks, special thanks to my team mates, the manager and all at the club for understanding my situation.

“Also I want to share with you the birth of my son Mateo, who was born extremely preterm and is fighting day by day with the help of the medical team.”

Silva played the full duration against Watford after missing the draw at Crystal Palace on New Year’s Eve and victory at Newcastle on December 27th.

Before that, the 31-year-old had also sat out a win over Tottenham on December 16th and Carabao Cup tie at Leicester three days later, before playing for the entirety of the win over Bournemouth on December 23rd.

Following the Watford game, City boss Pep Guardiola said Silva may have to miss more games because of his situation.

“He’s free to stay or leave, it depends,” Guardiola said.

“He wants to stay because he enjoys it a lot, but family is the most important thing in life.

“It doesn’t matter if we drop a lot of points because he is not here. I will never push him. Some days he will be here, some he will be out, it depends how his family is.”