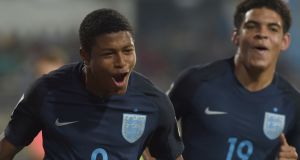 Rhian Brewster after scoring against USA in the Under-17 World Cup. Photograph: Indranil Mukherjee/Getty

Fifa is investigating Rhian Brewster’s claim that England team-mate Morgan Gibbs-White was racially abused by a Spanish opponent during the Under-17 World Cup final, football’s world governing body has confirmed.

Liverpool teenager Brewster made the allegation in a powerful interview with the Guardian last week. The 17-year-old Londoner told the newspaper he has either personally experienced racial abuse or witnessed it on a football pitch seven times, including five occasions in the last seven months.

Two of those alleged incidents — all against overseas opposition — took place on England duty, with the most recent being the abuse directed at Gibbs-White in October’s 5-2 victory over Spain in Kolkata.

A Fifa spokesperson said it has recently received a complaint from the Football Association and “is now analysing and gathering evidence”.

According to Brewster’s Guardian interview, Gibbs-White was called “a monkey” by a Spanish player after an incident in Spain’s penalty box.

“It was a goal-kick and I was getting into position,” Brewster said.

Later in the game, Brewster got involved in an argument with a Spanish player who felt England were not winning “respectfully”.

“I said: ‘How can you tell us to win respectfully when one of your players has been racist? What about your team-mate being respectful to us?”’

The English FA is understood to have flagged up the incident at the time and followed that up with additional evidence in November.

Spain had led the game 2-0 only for Brewster, who finished as the tournament’s top scorer, to get one back a minute before half-time. Wolves midfielder Gibbs-White equalised in the 58th minute before Manchester City star Phil Foden scored twice and Chelsea’s Marc Guehi added another in an emphatic victory.

For Brewster, though, the alleged racial incident was all too common and another example of how the game’s fine words on fighting discrimination are often not backed up by strong deeds.

The FA has already complained to Uefa about an incident that took place in a game against Ukraine at last May’s European U17 Championship, and Liverpool have also complained to the European body about two incidents involving Spartak Moscow and one with Sevilla in the Uefa Youth League.

The complaints from the FA about the Ukraine game and Liverpool’s on the Sevilla game were not upheld because of a lack of evidence, but Spartak were forced to close 500 seats in their academy stadium for their next game because of the monkey chants directed at Liverpool’s Bobby Adekanye in September.

The second Liverpool complaint against Spartak — related to their Youth League match at Prenton Park in December — has not yet been resolved but the player in question, captain Leonid Mironov, has denied directing a foul-mouthed and racist tirade at Brewster.