Just over 1,000 fans turn out for Slovakia friendly after dramatic week 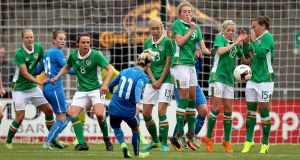 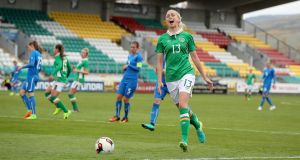 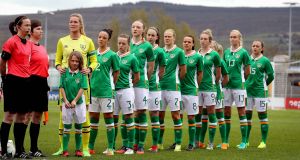 The players might be ever so slightly better remunerated than this time last week, but the Monday lunchtime kick-off in Tallaght provided a reminder that not all that much has changed for the Irish women’s football team.

This game was, it seems, scheduled so as to avoid a clash with either an Under-15 quadrangular tournament out in the AUL or the citywide Easter camps for girls that the FAI itself runs in the mornings. Allowing Slovakia to fly straight home was probably a factor too.

In the event, the official attendance was 1,037, a large portion of whom were children. At €5 per adult, €2 for a kid and no huge shortage, one suspects, of free tickets (Abbotstown was, for a start, much better represented than usual and so too the national press) that leaves the game falling some way short of washing its face.

It will all doubtless get a mention up at the association’s headquarters when they sit down to reflect on the dramatic, and for them traumatic, events of the past week.

A friendly against Slovakia, though, was scarcely going to have sent this team’s support levels skyward. A better measure of whether any progress has been made will be the first World Cup qualifier in September; when it will become apparent whether the public reckons it is worth making more of an effort than it takes on social media to back the team and whether the players, in turn, can do enough to keep them coming back.

Here, an undecided might have lost heart by half-time for it was generally poor quality stuff before the break. Ireland took the lead just after it, though, with a penalty by Stephanie Roche after a foul on Megan Connolly and the volume in the stand steadily rose from that point on as the home side took complete control; the only disappointment being that nobody, not even the particularly impressive Katie McCabe, could add another goal or two.

If you can see it, you can be it... ☘️#SupportHerSport pic.twitter.com/XnWS41AsjJ

Despite the poor finishing, those who came gave every impression of enjoying the occasion and the level of interaction between the young fans and the players after the final whistle was something that would be utterly impossible - it is certainly completely absent - with the men’s team.

The manager, Colin Bell, was more focussed on the defending with Ireland looking solid so far under his stewardship but the Englishman made no bones about the fact that there is a way to go if this side is going to break the nation’s duck when it comes to qualification for senior women’s tournaments.

“They’ve got to improve,” he said afterwards. “They’re not at the level I want them to be. I’ve been around in football a long time and in women’s football for the last few years. I’ve been lucky enough to work with world-class players so I know what the level is.

“We’ve obviously got to raise ours much higher to get anywhere near that but we’re on the way. This is my fifth match and we’ve had four clean sheets, so that’s a good start for us. That’s really important - the basics.

“You have to give yourself a chance to win games and if you’re conceding every match it means you’re going to have to score at least two and that’s a massive task for every team. So that’s why we’re putting the emphasis on defence to start off with.”

Here, the improvement on that front was clear, with Louise Quinn and Diane Caldwell looking increasingly untroubled as the match went on and Marie Hourihan, on in goal for Emma Byrne at the break, scarcely troubled at all through the course of her afternoon.

The standard can still look fairly patchy in places, however, and it remains to be seen whether Bell, with his track record, can mould a happier group of players into a side genuinely capable of challenging a qualification group’s better sides. Beating the more run of the mill ones a little more consistently, though, would be a significant step in the right direction.

“I hope so,” said the manager when asked if the group will be better for all that has happened over the past few days. “I do hope that would have been the case even if all these issues hadn’t been going on.”

1 Oisin Murphy denies taking cocaine after failed drugs test in France
2 Leo Cullen: ‘It feels like it all came crashing down on top of us’
3 Dave Hannigan: How Christy Ring arose the curiosity of American media
4 Racing 92 players test positive for Covid-19 two weeks before Champions Cup final
5 Gordon D’Arcy: If South Africa moves up north, it could all go south
Real news has value SUBSCRIBE
Crossword Get access to over 6,000 interactive crosswords