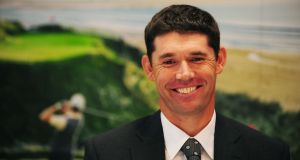 It was, perhaps, that moment on Saturday night when Peter Alliss began waxing lyrical about Freddie Couples’ trousers and how they’re the best fitted pants in world golf that you realised how much some of us will miss him if he carries out his threat to retire after just the 56 years working for the BBC.

Now, admitting that you’d miss Peter Alliss is quite a perilous thing to do because you’re certain to lose in or around 48 per cent of your friends, those who would have chosen to endure Colin Montgomerie on Sky in recent years just to avoid Peter over on the Beeb.

With Monty working for the Golf Channel this time around, it was actually safe to go back to Sky, and all by itself Pádraig Harrington’s candour about his non-love for Sergio Garcia made the visit worthwhile.

David Livingstone: “Between Justin Rose and Sergio, your heart would pick Sergio, wouldn’t it?” Pádraig: “Well . . . maybe not mine.” Butch Harmon: [Slaps Pádraig’s knee and almost falls off his chair with the howling].

Paul McGinley was there too, of course, on occasion still sounding like the keynote speaker at a symposium on leadership skills, shared visions and performance-enhancing limitations, but Pádraig’s presence was guaranteed to stir you lest you nodded off.

We’ve always known that his attention to detail is immense, too immense he has sometimes conceded – hands up how many of you have hollered “leave your bloody swing alone!” over the years? Cripes, that many? – but who knew his attention to every other golfer’s details was just as meticulous?

If you wanted to know, say, what club Hideto Tanihara used for his approach to the 14th green in the third round of the 2016 Nissin Cup Noodles Cup in Japan (no, that’s a real tournament), then Pádraig is your man, and if Ewen Murray had bothered to ask, he could probably have told us Hideto’s inside leg measurement too. There’s literally nothing he doesn’t know.

He could probably even have translated for us Peter’s commentary on Rory McIlroy’s mishap from the bunker at the seventh on Saturday.

“Oh, hello! I wonder what happened there? That could have been a Lucy Locket, the cab rank, the septic tank. Something horrible happened.”

Confession: Some of us entirely unfamiliar with rhyming slang for sockets/shanks rewound and used subtitles. Quite evidently, the subtitles person was at a similar loss, Lucy transcribed like she was a spectator in Augusta’s typically diverse crowd (we saw black, brown AND white Make America Great Again baseball caps), the cab rank skipped over completely, and then a very lengthy pause before mention of a horrible septic tank. At which point – and we’re just guessing here – the subtitles person rang management and asked “When the [beep] is Alliss retiring?”

Possibly soon. But the more crotchety the 86-year-old gets, the more it’s a bit like, “Pleeeeeeease Grandda, behave when the neighbours come in – don’t say anything offensive”. You know you shouldn’t chuckle, but it’s hard not to.

Any way, Matt Chapman probably offended as many people watching ITV’s Grand National debut on Saturday as Peter has managed to do in the course of his entire career behind the mic: “Since earth was created 4.6 billion years ago, man and woman have searched for God. Who would have thought he’d be here at Aintree: it’s Robbie Power!”

And all Robbie did was win the 3.40 on Sizing Codelco.

Our host for the day, Ed Chamberlin, had called it right a bit earlier, “The best bet of the day for me, personally, is for Matt Chapman to overheat”. He did too, much of his work – 8.24 per cent of which was an ad for the Turf Accounting industry – suggesting that he is the love child of John McCririck and Mrs Brown.

Like that time Ed asked him who was going off as favourite in the National.

“I TELL YOU WHAT ED, THAT IS ONE OF YOUR BEST EVER QUESTIONS!!”

“My goodness,” said Ed, “I must have asked some bad questions.”