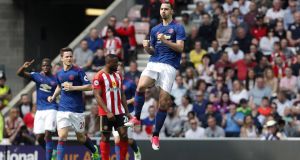 Zlatan Ibrahimovic opened the scoring as Manchester United eased past Sunderland at the Stadium of Light. Photograph: Russell Cheyne/Reuters

Zlatan Ibrahimovic had told us he was a “lion among pussycats” and sure enough Manchester United’s leading light delighted in helping devour David Moyes’s Black Cats as José Mourinho’s side sustained their hopes of a top-four finish.

While United have Thursday’s Europa League quarter final first leg at Anderlecht to look forward to, bottom-placed Sunderland are contemplating Championship football next season while, more immediately, their manager faces Football Association sanction in the wake of the comments he directed at the BBC’s Vicki Sparks. Ten points adrift of 17th place, the Wearsiders’ cause appears increasingly hopeless after an afternoon on which Moyes’s players created little more than half chances and were severely hampered by Seb Larsson’s highly controversial 43rd-minute sending-off.

The visiting team sheet made interesting reading. There was no David de Gea – depending who you believed either suffering from a minor injury or dropped – Marouane Fellaini was captain, Marcus Rashford initially warmed the bench and Luke Shaw started at left back.

After proving the subject – or should that be victim? – of some distinctly dubious man management on Mourinho’s part, Shaw began in such a hyper-mode it seemed as if he must have had a caffeine overdose. Such heavy involvement – he appeared perpetually on the ball – at times smacked of a player desperate to impress and never more so than when Shaw received a yellow card for ploughing through the back of Sunderland’s similarly lively Didier Ndong. Down in the technical area Mourinho pulled a face.

Human interest subplots aside, it proved a resolutely downbeat start, which felt somehow out of keeping with the unusually warm Wearside sunshine. Perhaps this sluggishness was only to be expected from two sides who have been heavily over-dependent on two veteran strikers this season.

Just as it is not Jermain Defoe’s fault that Sunderland are floundering so badly, neither is Zlatan Ibrahimovic culpable for United’s struggles to reach the top four. Who knows where these teams would be without that pair and it certainly came as no surprise when Ibrahimovic opened the scoring.

Meeting Ander Herrera’s pass, the Swede swivelled imperiously and, having turned Billy Jones while simultaneously wrong-footing Lamine Koné, proceeded to curve a wonderfully precise shot beyond Jordan Pickford and on into the bottom corner. Executed with minimal backlift, it was Ibrahimovic’s 28th goal of the season and left Pickford, who had earlier reacted superbly to turn Jesse Lingard’s shot away for a corner, helpless.

Defoe was finding the going somewhat tougher. Watched by his international manager, Gareth Southgate, the England striker’s most notable moment involved his winning a tackle against Shaw after a spot of assiduous tracking back.

By half-time Defoe and friends were lucky not to be two down – Fellaini could not quite force Shaw’s fine cross past Pickford – but arguably unfortunate to be reduced to 10 men after Larsson was given a red card for a slightly high challenge on Herrera as he followed through.

Larsson got the ball, many referees would have merely shown a yellow card and most people in the ground – Larsson among them – were outraged by the decision. Craig Pawson, the referee, would presumably argue that the height of the midfielder’s foot made it potentially dangerous and officials have a responsibility to minimise the risk of injuries similar to that recently suffered by the Republic of Ireland’s Séamus Coleman.

Goals from Zlatan Ibrahimovic, Henrikh Mkhitaryan and Marcus Rashford’s first in the league since September helped United to a comfortable win, though they were helped by Seb Larsson’s controversial red card

Less than 60 seconds into the second half Short’s misery deepened when Henrikh Mkhitaryan received possession on the edge of the penalty area before threading a low, left foot, shot through Koné’s legs en route to the bottom corner. Apparently still dozing at the restart, Sunderland had paid the price for their negligence in failing to close United down.

Shortly afterwards Shaw, who overall had played very well, limped off after Ndong inadvertently stood on his ankle. Presumably well aware of the cameras zooming in on him Mourinho made a big show of intercepting and embracing his young left-back as Shaw passed through the technical area.

By then Paul Pogba had come close to scoring a third for United when his volley skimmed Pickford’s bar and, despite continuing to create the odd half-chance, the collective slump of Sunderland’s shoulders indicated there would be only one outcome.

It seemed a good moment for Mourinho to introduce the pace of Rashford, a switch vindicated when, in the 90th minute, the teenager accelerated seamlessly on to Ibrahimovic’s pass, directed a low shot into the bottom corner – something of a theme was emerging here – and registered his first Premier League goal since September.