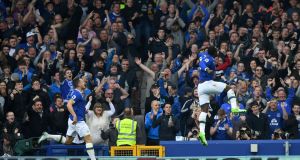 The winning streak is over for Craig Shakespeare but he will not linger on his first defeat for long. Leicester City’s interim manager was denied the chance to join Pep Guardiola and Carlo Ancelotti in winning his first six Premier League matches by an incisive Everton. Emulating the duo’s achievements in the Champions League will provide ample compensation.

England’s champions and the Premier League’s last surviving team in the Champions League warmed up for Wednesday’s quarter-final at Atlético Madrid with a merited defeat against Ronald Koeman’s patched-up side. Not that the Leicester team on display at Goodison Park will be the one that carries the flag in the Spanish capital. They were much-changed but contributed to a roller-coaster contest on Merseyside.

Commitment to attack, defensive inexperience, errors and the odd sprinkling of quality made for a richly entertaining contest. It was to Leicester’s credit that the first Champions League quarter-final appearance in their history affected Craig Shakespeare’s team selection but not their focus or strategy. The lead changed hands three times in the first half and the script for an open game was set inside the opening minute.

Daniel Amartey and Ben Chilwell were drafted into the visiting defence as Wednesday’s date at the Calderón prompted Shakespeare to change the settled side behind his 100% winning start. The right-back and Yohan Benalouane, deputising for the injured Wes Morgan, were both caught cold as Kevin Mirallas sprinted through the Leicester defence before being pulled down by Amartey. The referee Bobby Madley played an intelligent advantage as Tom Davies took over, shifted the ball on to his left foot and beat Kasper Schmeichel at the near post to score the fastest Premier League goal of the season at 29 seconds. Bobby Madley’s role was not overlooked by Morgan Schneiderlin, who congratulated the match official during Everton’s celebrations. They did not last long.

Leicester’s changes included bench duties for Riyad Mahrez and Danny Simpson plus a day off for Christian Fuchs, Shinji Okazaki and Wilfred Ndidi but their potency on the counter-attack stayed constant. Only four minutes had elapsed when an Everton attack broke down on the edge of the Leicester area allowing the impressive Demarai Gray to surge upfield. A more seasoned right-back than Mason Holgate would have taken a yellow card for the team by tripping Gray in the centre circle but he ran through at Everton’s static central defence and released Islam Slimani on the right. The unmarked striker finished expertly under Joel Robles.

Koeman was down to the bare bones defensively with Séamus Coleman and Ramiro Funes Mori out with long-term injuries and Ashley Williams suspended, and inexperience cost Everton again when Leicester took the lead through Marc Albrighton. Matthew Pennington conceded a cheap free-kick having turned into Jamie Vardy and trouble when a first-time clearance was required. Albrighton curled his delivery from the left over the unreliable Robles and into the top right hand corner.

Holgate and Pennington overcame their early jitters to provide valuable contributions to a home display that was elevated by the craft and industry of Lukaku and Ross Barkley, delivering stark contrasts to their performances at Anfield the previous weekend, plus the fit-again Schneiderlin.

Goodison was treated to a fourth goal with only 23 minutes on the clock as Everton levelled in style. The central midfield trio of Schneiderlin, Davies and Idrissa Gana Gueye combined well to work the ball out to Barkley on the right. He whipped a glorious cross behind Leicester’s central defence and there was Lukaku to head home his 22nd league goal of the season. It was a sixth assist of the calender year for Barkley and the eighth consecutive game in which Lukaku had scored at Goodison – the first time an Everton striker has accomplished the feat since Fred Pickering in 1965.

Barkley looked certain to restore Everton’s lead when put through on goal by Davies’ challenge on Vardy. The midfielder rounded Schmeichel and struck for goal, only for the Leicester keeper to get the slightest touch on the shot and steer it wide. Barkley looked on in disbelief but from the resulting corner by Mirallas, the captain Phil Jagielka climbed highest and headed his second goal of the week, into Schmeichel’s top corner.

Lukaku edged even closer to the Golden Boot when Leicester failed to defend another Mirallas corner in a second half in which they enjoyed greater possession but little end-product. Jagielka was again the target and he got the slightest touch ahead of Andy King for the ball to drop to the Belgium international at the back post. He was never going to miss, and lashed in his 10th goal in five home games, beneath the exposed Schmeichel.

Leicester’s substitutes Mahrez and Leonardo Ulloa twice combined to threaten late-on but Gueye and Robles respectively blocked the striker’s headers to ensure their winning sequence was ended. On to Madrid.