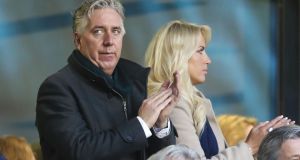 John Delaney said a lot of people in the FAI were confused by the series of events. Photograph: Niall Carson/PA Wire

It wasn’t until the early hours of Wednesday morning that the threat of Monday’s friendly international against Slovakia being boycotted abated, but the association’s chief executive insisted the mediation could have been held before the squad held a dramatic press conference at Liberty Hall on Tuesday.

“There’s no point going back over it because the matter is resolved now, but what I will say is that last Sunday Peter McLoone had been proposed by us as a mediator to discuss on all of those issues,” Delaney told Red FM over the weekend.

However, Stuart Gilhooly from the PFAI refuted Delaney’s version of events, claiming they were inaccurate.

Its contention is two-fold; firstly that no settlement proposals were ever tabled and also that the PFAI had to be excluded from any talks or mediation, a policy emphasised by the association’s high performance director Ruud Dokter immediately after the press conference.

“The PFA Ireland was surprised and disappointed to hear the comments attributed to John Delaney,” read a statement issued last night.

“We are conscious of the fact that the chief executive was out of the country on UEFA business when the dispute was at its most important stage and may not be entirely familiar with the exact sequence of events.”

It said that last Sunday the FAI sent a letter to player saying they would not agree to mediation involving the PFA Ireland.

“No response to this letter had been sent by the players or their representatives when an email, in apparent contradiction to this letter, was sent on Monday evening, in which the FAI confirmed that they were willing to enter into mediation to progress matters and said whoever represents the players was a matter for themselves.”

It said this was well received by players, “despite the apparent volte face” and players sought clarification of the position given the previous correspondence.

“They first suggested that settlement proposals be sent answering the issues which had been canvassed for nearly 12 months at this point.

“Clearly if these were acceptable, no mediation would be necessary. They then said that if these proposals were not acceptable that a mediation would need to take place on Wednesday, together with confirmation the PFA Ireland can represent the players, and be concluded by Thursday.”

The players also asked for that confirmation that they would not be penalised for their involvement in this process.

“They then said that unless these basic conditions were met, a press conference would be held.

“At no stage was the identity of the proposed mediator given to us and in fact we were not informed of his identity until Wednesday morning.

“The players fully expected agreement to these very reasonable points and were most surprised to receive a response which did not address them and merely expressed surprise at the calling of a press conference.

The statement added that the whole process would not have been necessary if the FAI “engaged in a reasonable and sensible manner” when player concerns were first mooted.

Instead of dealing with the specific items raised by the players such as the withdrawal of their daily allowance and any reimbursement for taking leave from their day jobs, Delaney concentrated on the broader topic of budgets for the squad and the sector in general.

“We’ve spent a lot of money preparing teams for international football,” Delaney said. “What’s important is for this particular group of players is that they qualify for a major tournament, as our manager Colin Bell said yesterday.

“We’ve put a lot of resources, millions of euro, into the development of Irish football over last 10 years. The evidence is there.

“Our commitment to women’s football shouldn’t be questioned because I can see what we do.”

“Most people know I work very long hours in my FAI role visiting clubs so there will be no great issues,” he insisted.

“Once you know UEFA commitments, I can work around what I’ve to with my own role. Our next meeting, as I gather it, isn’t until May.”