Sadio Mane set for knee operation and two months out 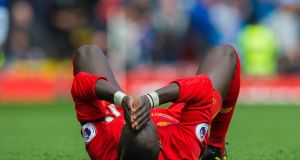 Liverpool’s Sadio Mane on the ground after picking up an injury during the Merseyside derby with Everton. Photo: Peter Powell/EPA

Liverpool’s Sadio Mane will undergo a knee operation on Tuesday which is expected to keep him sidelined for two months.

The Senegal international, who turned 25 on Monday, will go under the knife in London having suffered meniscus damage in a challenge with Everton’s Leighton Baines during the Merseyside derby earlier this month.

The expected lay-off period for Mane is two months which means he will miss the remainder of the Reds’ Premier League run-in.

Mane moved to Anfield for £30million from Southampton last summer and is the club’s top scorer having netted 13 times in the league in 27 appearances.

The Reds had initially been hopeful that surgery would not be necessary but Mane will now undergo a procedure on Tuesday and miss the final six games of the season as Jurgen Klopp’s side look to finish in the top four and return to the Champions League.

Speaking last week, Klopp was fairly certain that surgery would be the only option for Mane.

“He will get a longer break and will be ready for next season,” the German had said. “That is the only good news.”