Ireland without player of the year Harriet Scott for double header 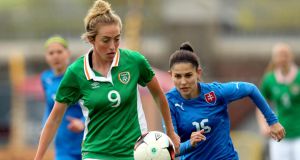 Megan Connolly has been named in Colin Bell’s squad for the the World Cup qualifiers against Slovakia and the Netherlands in Tallaght. Photograph: Ryan Byrne/Inpho

Ireland will be without senior international Player of the Year Harriet Scott for the World Cup qualifiers against Slovakia and the Netherlands, forcing manager Colin Bell to improvise in an area where his options had already been limited.

“Like Megan Campbell, she’s a full back, so it’s left us short in a position where we don’t really have too much cover but we will have to find a solution from within the group,” said Bell as he announced a squad of 22 for the two games, both of which will take place in Tallaght.

Stephanie Roche also misses out as she struggles to overcome a knee problem but Aine O’Gorman is back after a spell on the sidelines with a similar problem and Florida State’s Megan Connolly is included for the double header.

“For a lot of these players having the two games in quick succession will be a new experience because so far we have only have had one in each window,” said Bell. “A lot of them are playing here in Ireland, they are not professional, and so having to pick themselves up after a game of this sort of intensity will be a real challenge.”

The scale of it is exacerbated by the fact that the second game is against the champions of Europe, although Bell insists that that is not a concern just yet. “My job is to focus on Slovakia,” he says. “They are a country that are very close to us.”

Ireland currently sit joint top of qualifying Group Three with the Netherlands who they held to a scoreless draw in Nijmegen back in November.

Bell’s side will face the group’s other big seeds, Norway, home and away in the space of four days in early June.