McCarthy to leave Ipswich Town at the end of the season 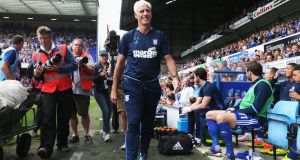 Mick McCarthy: former Republic of Ireland boss will be leaving Ipswich Town at the end of the season. Photograph: Alex Morton/Getty Images

Mick McCarthy will be back in the managerial job market in the summer after he and Ipswich Town owner Marcus Evans apparently decided it would be best for the 59-year-old to move on at the end of this Championship season.

The former Ireland boss is unlikely to be short of offers but it remains to be seen if the ones that come in are of the sort a man who has generally felt himself to be underappreciated would hope for.

McCarthy’s future at the club had been in question for some time although he had suggested himself that he expected to agree a new contract. The restlessness of the fans, frustrated by the style of football employed and the disappointing results, had been apparent for some time.

But the former Millwall, Wolves and Sunderland boss clearly felt that the work he was doing was still appreciated by an employer who gave him precious little money to work with.

In the end, though, even Evans seems to have decided that, after five and a half years, it was time to give someone else a go.

His stint had started well back in November 2012 – more than 100 Championship managers have left their jobs since – when he took over a team that was sitting last in the table and guided them to 14th place by the end of the campaign.

Two seasons later, they made the play-offs but last year’s 16th place finish was the club’s worst in 58 years and a significant improvement was probably required this season if he was to secure his new deal.

He appeared to have generated it through the opening weeks of the campaign with Ipswich winning their opening four league games. But, after a young side was narrowly beaten by Crystal Palace in the League Cup, the momentum evaporated and it took 11 games for the team to secure another 12 points.

In recent weeks, as doubts about his future grew in the absence of a firm indication of support from Evans, he struggled to generate the sort of improvement that would have strengthened his position.

The club went out of the FA Cup, losing at home to Sheffield United in the third round back in early January and since then they have won four of 13 league games, scoring just eight times along the way.

He has, of course, been hampered by injuries at times and not all of the signings he made last summer made the sort of impact that would have been hoped for. It would be bordering on miraculous if they all had but McCarthy’s margin for error was limited enough if the ambition was really to be in or around the play-off places again.

“I have loved my time here and I am proud of what I have achieved over the last six years, and the relationship I have enjoyed with the players and all the staff at the club in that time,” said McCarthy in a statement issued by the club.

“I won’t be leaving with any regrets. I have given everything for Ipswich Town and I will see out my contract in the same way.”

The tributes paid to him by former players in the media and online in the wake of the news having been announced certainly supported the notion that he had a strong bond with most of those he worked with and that he probably did well in terms of getting the best from them.

If Evans does not intend to provide McCarthy’s successor with the substantially greater funds required to bring more quality into the squad, then he may come to regret his decision.

McCarthy, though, seems certain to be sought out as the ultimate safe pair of hands and he is widely seen as having another stint as Ireland manager in him, something he is still believed to be very open to.