Players can no longer be cup-tied, fourth sub allowed in extra-time 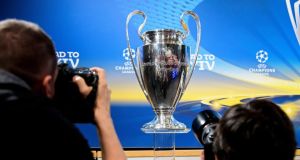 Uefa have confirmed a number of changes to club competitions from the 2018/19 season. Photograph: Jean-Christophe Bott/EPA

Teams in Uefa’s club competitions next season will be able to make a fourth substitute in extra time and use new signings who have already played in the tournament for their former sides.

These changes were among several announced by European football’s governing body on Tuesday and they follow decisions made by Uefa’s executive committee in February and the game’s law-making body, the International Football Association Board, earlier this month.

From next season, clubs that reach the Super Cup and the finals of the Champions League and Europa League will be able to have 12 substitutes on the bench, up from the usual seven.

In a statement, Uefa said this will give “coaches more flexibility regarding substitutes, and facilitate their squad management for the most important fixture of the season”.

A fourth substitute in extra time has already been trialled by Uefa in age-group tournaments and is allowed in this season’s FA Cup.

The decision to let clubs register three new players “without any restrictions” after the group stages, however, may be more controversial, as it effectively ends the idea of being ‘cup-tied’. For example, if the rule was in place this year, Philippe Coutinho would be able to play for Barcelona in the Champions League, despite already featuring for Liverpool.

But Uefa believes it is simply bringing its rules into line with what happens in domestic leagues across Europe.

Champions League play-offs, group-stage games and knock-out matches will now kick off at 8.0pm, Irish time, but in the group stages, two of the games on Tuesday and Wednesday will start at 5.55pm, apart from on the last matchday, when they will be played simultaneously.

Europa League games will be split between these two kick-off times until the quarter-finals when they will all start at 8.0pm. The Super Cup will also kick off at 8.0pm.

These split kick-offs may cause headaches for domestic fixture schedules, as nobody will want to schedule a game against televised European games. Two years ago, Uefa was annoyed when Manchester United’s FA Cup replay at West Ham was played at the same time as a Champions League quarter-final, and Barcelona have played a league game in the earlier slot this season.

Another change announced on Tuesday was to allow clubs that have won the Europa League, or its forerunner the Uefa Cup, three times in a row or five times in total to wear a multiple-winner badge on their shirt sleeves.