Ireland hold out hopes for striking difference against Turkey 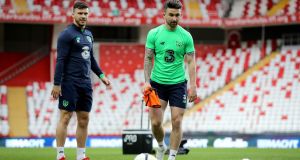 Cenk Tosun is the man of the moment in these parts, with locals excitedly revealing themselves to English-speaking visitors as devoted Everton fans. Taxi drivers, their pride obvious, were asking their passengers if they know Tosun the way they surely would have known Arda Turan in his heyday a few years back.

After a slow start the 26-year-old has scored four in three for Everton, but still the scale of the excitement seems a little exaggerated until you start to consider the expectation that is building on the basis of Seani Maguire’s five in four for Preston in the Championship.

The former Cork City striker seems set to get his second taste of senior international football at the Antalya Arena on Friday evening, but such is the likely extent of the manager’s experimentation that Martin O’Neill suggests neither he nor anyone else will be judged too harshly on Friday night’s performance.

Instead, the manager argues, the game marks the start of a process that will continue at least into June, when Ireland face friendlies against France and the USA.

O’Neill says he wants to review the system as well as the personnel as he tried to find a formula that will retain what he sees as a reasonable level of defensive solidity while adding a few more goals.

A goal for any of the strikers given a run out on Friday might be taken as a significant step in the right direction.

O’Neill hinted that he might shake things up positionally, and he does seem well enough equipped for a switch to wing backs. He also expressed a desire, however, to squeeze two strikers into the formation, but has a reluctance to sacrifice a midfielder lest the team get overrun through the centre.

Clearly, there may be a fair bit of chopping and changing to be done between now and the summer, but the likes of Conor Hourihane, Declan Rice and Matt Doherty are among those likely to get a bit of game-time as the auditions for starting, or even starring, roles continue.

Doherty’s established ability to play on either flank might earn him a start on the left on Friday, but Cyrus Christie’s service during Seamus Coleman’s absence seems more likely to be rewarded with a crack at a role he insists he can perform well in. Bradford’s City’s Colin Doyle is expected to start in goal.

And after a week in which Rice said he does not feel he has a decision to make in relation to his long-term international future, a start here might be a stepping stone to the competitive cap in the autumn that would essentially make his mind up for him.

A few of the injured regulars might well be back by then but this game may yet come to be seen as a significant changing of the guard. The problem is that O’Neill must achieve a pretty decent success rate with the players he throws in if a side that was well beaten last time out is to be better than before come the end of the transitional period.

The manager’s mood was good as he weighed it all up on Thursday, but there was still just a hint of irritation when he was asked if the scale of the defeat by Denmark demanded radical change. In reply, he stuck to the line that had James McClean scored to make it 2-0 then what turned out to be Ireland’s darkest ever night in November would instead have ended in World Cup qualification.

That we can only ever wonder about, but it was hard to disagree with his observation that Ireland’s position now bears a striking resemblance to that of their Turkish hosts.

At his press conference an hour or so after O’Neill’s, Turkey’s Romanian coach Mircea Lucescu fielded questions about picking his team up after a calamitous conclusion to the qualifying campaign, the limited number of high-level opportunities for the nation’s younger players and the exclusion of older established stars.

On the face of it the relative strength of the Turkish league puts him in a stronger position to replenish his squad than O’Neill, but Lucescu, who visited Dublin as Zenit coach a couple of years ago for the Europa League group game against Dundalk, bemoaned the number of imports at the wealthier club sides, a point underlined by the top of the table clash last weekend between Basaksehir and Besiktas in which the likes of Gael Clichy, Emmanuel Adebayor and Alvaro Negredo all featured.

Turan did not as he is injured these days, and the much younger midfield prospect Emre Mor of Celta Vigo misses out having been reported by his club to be suffering from a high temperature. Tosun’s involvement should mean none of that will trouble the 32,000 or so locals expected to turn up.

Of more interest from an Irish perspective will be whether the new Irish strikers can trouble a half decent international defence.