Mick McCarthy to leave Ipswich at end of season 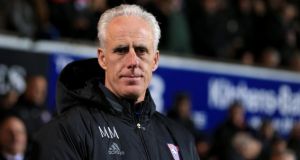 Mick McCarthy has announced that he will leave Ipswich Town at the end of the season. Photo: Joe Giddens/PA Wire

Ipswich manager Mick McCarthy will leave the club at the end of the season, it was announced on Thursday.

Owner Marcus Evans confirmed former Republic of Ireland boss McCarthy will depart after almost six years in charge, with his contract due to expire in the summer.

Evans said on Ipswich’s website: “Mick and I had a discussion and we both agreed that this was the best way forward for him and for Ipswich Town.

“It never got to the point where we actually talked about a new contract. It just felt right that it was time for us both to look at different options.”

Evans added: “Mick will see out his contract here and then we will look to make an announcement regarding his successor in due course.”

Ipswich said the agreement followed a meeting on Wednesday between Evans and McCarthy.

McCarthy said: “I had a good discussion with Marcus and we feel this is the right thing to do for me and for Ipswich Town.

“I have loved my time here and I am proud of what I have achieved over the last six years — and the relationship I have enjoyed with the players and all the staff at the club in that time.

“I won’t be leaving with any regrets. I have given everything for Ipswich Town and I will see out my contract in the same way.”

Ipswich have remained in the Sky Bet Championship for the duration of McCarthy’s reign. They currently sit in 12th place.