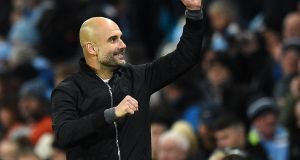 Manchester City manager Pep Guardiola: “What we show in the last games is we never give up.” Photograph: Getty Images

Pep Guardiola praised Manchester City’s increasing ability to win in “Fergie time” after West Ham United were beaten by David Silva’s 83rd-minute strike, to make it three successive matches his side have served up a late, late show in the manner of Manchester United under Sir Alex Ferguson.

The victory was a 13th straight league win, to equal the all-time single season top-flight record most recently achieved by Arsenal in 2001-02 and Chelsea last term as Guardiola’s side maintained an eight-point lead over United.

After Huddersfield Town and Southampton were beaten in City’s previous two games thanks to Raheem Sterling’s strikes, the City manager was asked if his side now have their own version of “Fergie time”.

“If we can take something about the Fergie time, it is welcome, a pleasure. I heard about the Fergie time. I was not here in that period but of course you have to have that. What we show in the last games is we never give up. The opponent doesn’t want to play. They just want to defend. I understand. I am not judging but it is difficult. Always they have 10 players behind the ball. Hopefully in the future opponents can want to play,” replied Guardiola.

There was a brief but telling nod to United midfielder Paul Pogba too, following the Frenchman’s comments about hoping for City players to fall injured before next week’s Manchester derby.

Pogba, of course, is the one who misses out after his red card against Arsenal - but Guardiola took the high road in response.

“I would like that Paul could play against us. I like to face the team with the best players possible,” he said. “I think it was an expression, I’m pretty sure he doesn’t want our players to get injured.”

Both clubs have Champions League group games to fulfil before arguably the biggest game of the Premier League season, City against Shakhtar Donetsk and United versus CSKA Moscow, but the build-up starts now.

City’s Fabian Delph admitted “it would be nice” for Manchester City to break the Premier League record for consecutive wins at Old Trafford next weekend, but insists his side are not looking too far ahead.

“It would be nice (to do it at Old Trafford). “It’s a derby, we want to win that game. But we’re taking each game at a time. We’re not thinking what’s happened previously or we’re not looking towards the future, we’re just taking it game by game and hopefully we can get the three points in that game too.”

West Ham manager David Moyes has now overseen three defeats and a draw since taking over from Slaven Bilic, but insists things will soon be looking up.

His team sit 19th in the table, with Chelsea and Arsenal their next opponents, but the Scot is refusing to repeat the overly pessimistic tone he struck at Sunderland.

“I always think we will get away. I don’t think we will be in trouble,” he said.“I think we have a good team, good players. I thought this performance gives us hope it can be done.

“I said to the boys if we do that against the other top teams we will give ourselves a chance and, as everyone knows, we’ve got a lot of the top teams coming up in the next few weeks.”

As for the pragmatic approach he sent the team out with, Moyes made no apology.

“I really want the football to be attacking but we are playing against a team that we can hardly get the ball so what are you going to do?” he said. “I’m not going to stand and give them every opportunity to score. I’m not here to make it look good for Man City, I’m here to get a result for West Ham.”

West Ham made it difficult for the home side to break them down and Delph admits it is getting more difficult as teams set out to stifle Pep Guardiola’s normally free-scoring side.

He added: “It was difficult. Teams seem to be getting everyone behind the ball and making it difficult for us to break them down. But we’ve got players like David (Silva) in the team and great players and match winners and we knew if we kept going and kept plodding away that we would get our chances.

“I think the intensity was there, but when you’ve got 11 men behind the ball that are not interested in anything other than just parking the bus it makes it difficult. It’s happened a few times this season. “But we get given a game plan to follow and when we do we seem to win the games.”