World Cup 2018: Around the grounds 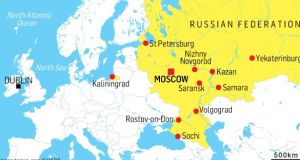 This summer will see Russia’s national stadium become just the third in the world to complete a hat-trick of the World Cup final, European Cup final and a summer Olympics. Rebuilt for the 2018 tournament – the distinctive red and yellow seats which adorned the ground as Manchester United beat Chelsea on penalties to win the Champions League in 2008 are gone – it reopened on November 11th as Argentina beat Russia 1-0 in a friendly.

The swanky new home of Zenit St Petersburg, the Krestovsky Stadium arrived fashionably late, hosting its first domestic fixture in April this year – eight years after the original expected completion date of 2009. Based on the design of Japanese architect Kisho Kurokawa, who died in 2007, plans for the stadium – which cost around the €1 billion mark - had to be redrawn after Russia won the right to host the World Cup, in order to allow an increased capacity of 68,000.

The home of Spartak Moscow has been open since 2014 – and was one of the four stadiums used for this summer’s Confederations Cup. The ground beat Dynamo Moscow’s VTB Arena for the role of Moscow’s second World Cup venue, and VIP seats dominate one of the main stands. Has a 24.5 metre statue of the gladiator Spartacus outside – the inspiration for Spartak’s name.

Another of the host stadiums for the Confederations Cup, the Kazan Stadium was opened in 2013, when it held the opening and closing ceremonies of the Summer World University Games. Designed by the same firm behind the new Wembley and Arsenal’s Emirates Stadium, it also hosted the 2015 World Aquatics Stadium – although the swimming pools are now long gone.

Another stadium still firmly in the construction stage, the Cosmos Arena promises to be impressive when completed. The ground was originally meant to be located on an island to the south; however the lack of infrastructure – including a bridge leading to it – necessitated a move to the north of the city. According to Fifa, the design of the stadium is based on the theme of space – a nod to the area’s aerospace heritage.

Kaliningrad is located away from mainland Russia, and sits between Poland and Lithuania on the Baltic Sea. Construction of the stadium – which is yet to be completed – didn’t begin until September 2015, making it the last of the World Cup projects to get underway.

Nizhny Novgorod is the closest of the World Cup venues to the hub of Moscow, lying just 400km to the east – which, in Russian terms, isn’t that far. The stadium’s design is supposedly inspired by two key aspects of nature in the Volga region – water and wind – but is yet to be completed.

Originally built in 1962, the Central Stadium was renovated as recently as 2002 – but after being awarded the World Cup it was a case of out with the old, in with the new and the original ground was demolished. Located on the banks of the Volga River, the capacity will be reduced down to 35,000 after the tournament and it will become the new home of FC Rotor Volgograd.

The Mordovia replaces the Start Stadium, which had a short lifespan after being built in 2004 – but with a capacity of 11,613 was always going to fall short of World Cup standards. The future home of FC Mordovia Saransk, the capacity will be heavily reduced by nearly 20,000 after next summer’s tournament.

Expected to be completed later this year, the new Rostov Arena is located on the south bank of the River Don. Like many of the stadiums being used next summer, the construction of the ground was delayed – however not for the usual reasons. Indeed, in June 2013 when ground was being broken, five perfectly-preserved five World War II shells were found in the area where the foundations were supposed to go, causing a justified hold-up.

The Fisht Olympic Stadium was originally built for the 2014 Winter Olympics – but has since been converted into an open air facility in order to host football games this summer. The areas of the ground used for the opening and closing ceremonies in 2014 have been replaced by temporary stands. Another stadium used for the Confederations Cup.

Yekaterinburg is the fourth-largest city in Russia, and the furthest east of the host cities being used for the World Cup. The stadium – still to be completed – was going to fall short of the minimum 35,000 capacity required by Fifa. However, this problem has been easily sidestepped by adding 12,000 temporary seats outside of the ground itself.