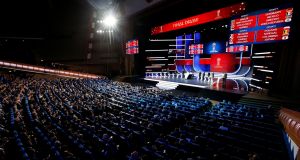 General view after the draw for the 2018 World Cup was completed. Photo: Sergei Karpukhin/Reuters

An opening game between what are ostensibly the two weakest sides at the tournament may not have been quite what the organisers of next summer’s World Cup had been hoping for in advance of Friday’s draw, but with Russia handed a viable path to the second round and all of the big guns coming away happy, there will be some relief at the way things have turned out.

Germany will kick off the defence of their title against Mexico in Moscow three days after Russia take on Saudi Arabia but it is Spain’s game against Portugal on day two that looks a likely highlight of the opening round. The general shortage of blockbuster fixtures reflects the fact that is no “group of death” and makes for an early feeling that it might well be the second round before this tournament graduates from competitive to really compelling.

Joachim Loew’s side might well face a rematch at that stage with Brazil, whose World Cup dreams they so comprehensively shattered at the semi-final stage in Belo Horizonte three and a half years ago. It was a devastating defeat for the 2014 hosts and the prospect now of gaining revenge would surely appeal although even if it were secured it would surely not make up for the collective pain endured as millions of Brazilians watched the tournament final at the Maracana and wondered what might have been.

It was, in a rather smaller way, the turn of the Irish to do that here and there was plenty to be envious over. Denmark were landed in a group with France, Australia and Peru, all of whom will head to the tournament harbouring genuine hopes that they can make it to the knockout stages.

There would – if you allow yourself to play this cruel and somewhat masochistic game – have been trips to Saransk, Samara and Moscow for the Boys in Green had it been Ireland in Pot Three. And if you’re inclined to get completely carried away and imagine Martin O’Neill’s men qualifying there would have been the prospect of Lionel Messi running at Duffy, Clark and co. in the round of 16.

Few are lucky enough to possess powers of imagination on the scale required to allow them contemplate anything much beyond that.

The French, in any case, will have their status as contenders strengthened slightly by what looks a straightforward enough task over the initial two weeks of the tournament and while Age Hareide declared himself to be “happy, of course,” a good deal seems likely to depend from a Danish perspective on just how good a young and fairly inexperienced Peruvian side proves to be.

For Didier Deschamps the draw was quickly proving to be a mixed blessing with L’Equipe promptly adding to the pressure on the French coach by declaring in its headline that France had been “rather spoiled” by the way things have been set up for them. He was quick to remind them that they have all been down that particular road before.

“The last time, you were all unanimous to say that it was a wonderful draw, even some of the players ...” he said of the 2014 tournament in Brazil where the French coasted almost effortlessly to the quarter-finals then lost tamely to Germany when they encountered quality opponents for the first time.

“It’s not going to be done by snapping your fingers,” he continued. “We will work on us, on our opponents, and go to this World Cup with a lot of ambition.”

Germany and Argentina will do precisely the same and while both look set to make it safely to the second round, they find themselves in two of the more interesting groups with Iceland, Croatia and Nigeria all joining the South Americans in Group D while Sweden and South Korea along with the Mexicans will provide the oppositions for the current title holders.

“There is no reason to be nervous,” observed Loew. “They are strong and very interesting opponents but we want to lay the foundation for a successful title defence in this group. That is our goal.” Manuel Neuer pointed to Sweden’s play-off success against Italy as evidence of the threat that they could pose but he too had the air of a man who fully expects the team to progress to a point where the challenges encountered will be that little bit more menacing.

For the hosts, making it through to the second stage would likely mean a meeting with Spain or Portugal or, at a stretch perhaps, an Iranian team coached by Carlos Queiroz that kept 12 straight clean sheets in qualifying. But now getting even that far suddenly seems achievable after what was a very kind draw for the hosts.

By July 1st, however, they seem likely to have made their exit and any desire to humour hosts will have passed and their tournament, we hope, starts to really take off.