The Workers’ Cup, a film about the hard lives of stadium labourers, is sad and revealing

A new film, The Workers’ Cup, provides a fascinating glimpse into the lives of the workers who are making the Qatar World Cup in 2022 happen. 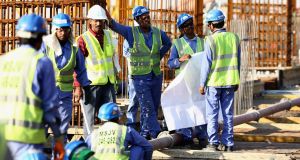 While Fifa’s football family enjoyed the hospitality of Vladimir Putin at the Kremlin over the weekend, construction continued on the futuristic facilities for the next global gathering in Qatar in 2022. A new film, The Workers’ Cup, provides a fascinating glimpse into the lives of the workers who are making it happen.

Qatar is the richest country on Earth by the measure of GDP per capita, and its elite dreams of turning the capital city, Doha, into a regional London – the place where the oligarchs of the Middle East and South Asia put their money. Qatar has all the capital it needs to become a world financial hub, but it lacks the labour force: there are fewer than 320,000 Qatari citizens.

The workers must therefore be imported, and there are now 1.6 million migrant workers in Qatar, mainly men in their 20s and 30s from Africa and south Asia. They are segregated from the Qatari population, housed in large labour camps outside the towns and denied access to facilities they have helped to build, like the huge shopping malls where wealthy citizens while away the days. They work long hours in oppressive heat, and typically earn $200-$400 a month.

The Workers’ Cup is a football tournament for people employed by the contractor firms who are building 2022 World Cup infrastructure. The film-makers have gained a remarkable degree of access to follow a group of workers at the Gulf Contracting Company.

Some of these men were lured to Qatar by false promises. The captain of the football team, Kenneth, paid an agent back home in Ghana $1,500 on the understanding that he would be travelling to Qatar to become a professional footballer. On arrival he discovers he will be working construction, but he’s already spent all his money and has no choice but to accept the deal.

Not all the workers have been tricked into coming: many are there because even $200 a month seems a reasonable salary compared with their prospects back home. As the goalkeeper, Samuel, another Ghanaian, says: “If this is hell, I’d rather be in hell in Qatar than in heaven in Ghana.”

The men exist at the bottom of an obvious racial hierarchy in which the Qataris are at the top and westerners on the rung below. They are surrounded by evidence of vast wealth that starkly emphasises the injustice of their situation. But while they complain often about dreariness and drudgery – the low wages, the years away from their homes and families, the fact that they seldom get the chance even to speak to a woman – they don’t often discuss the injustice in general terms, or what might be done to change it.

At one point, a Kenyan worker named Paul starts a canteen table conversation about freedom: what does it mean to be free? The others suggest some possible answers until Kenneth wonders: “Why do you ask us this question?” It turns out that Paul has been asked the same question earlier that day by a white journalist and realised he didn’t have a good answer. They talk about workers coming to Qatar in search of “greener pastures” and finding the reality a bitter disappointment.

“You could call it that,” Paul says.

But everyone else stays silent, as though they would rather not think about the implications of this statement.

Mostly these men are finding ways to cope. Some try to think of it in spiritual terms. Two Nepalis sit on a park bench in Doha looking at the futuristic towers of the city centre, and reminisce about coworkers who have died in accidents building them. One tells the other that his belief in the immortality of his soul helps him to endure.

Others are broken by the effort. We hear of one man who stabs his room-mate in the leg in a (successful) bid to be deported for reasons of insanity. The most widespread attitude is a kind of stoicism, expressed by the 38-year old Indian office manager, Sebastian: there will always be the rich and the poor, and if we were the rich, we wouldn’t be here. All you can do is work and suffer and hope that one day, somehow, you climb into the privileged class and become one of those who exploit the ones further down.

It turns out that one of the best coping strategies is football. Watching the passion of the players and fans of the Gulf Contracting Company team, you understand why the game first became popular in the industrial cities of 19th-century England. The freedom and spontaneity of what happens on and around the field could not be more different from the regimented alienation of industrial work.

With scarcely any outlet for emotional expression in their regular lives, the men gleefully seize the opportunity the games give them to sing, dance and have a good time together. For the decisive match, one man creates an angel costume out of cardboard and tinfoil; he looks like something out of the Rio Carnival, to the delight and hilarity of his coworkers.

We discover that The Workers’ Cup is itself another con: it’s meant to be used for propaganda and recruitment purposes, to create the impression that workers in Qatar are having fun and that Qatar would be a good place to come and work. Kenneth is never going to earn the chance to become a professional footballer. And yet the shared joy and grief that the players and fans experience is precious in itself, even though it is transient.

If this film did not so eloquently expose the shame of Fifa’s decision to award the World Cup to Qatar, you could imagine the governing body promoting it worldwide as an illustration of what is powerful and beautiful about the game itself.

1 James Ryan returns to the Leinster fold for Benetton clash
2 Will Addison starts as Ulster face crunch Bath showdown
3 Ralph Hasenhüttl: Shane Long at the heart of Southampton revival
4 Matt Williams: No easy way to earn your spurs as a top coach
5 James Lowe relishing the work, rest and play of his Irish rugby adventure
Real news has value SUBSCRIBE
Crossword Get access to over 6,000 interactive crosswords