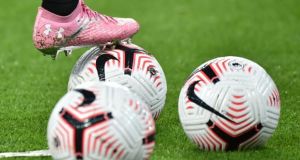 Project Big Picture plans are “a sugar-coated cyanide pill”, according to a leading fans’ group.

The PBP plans emerged on Sunday and if adopted would represent the most significant changes to the structure of the English game in a generation.

They include an immediate £250million (€275m) bailout for EFL clubs starved of matchday income by the coronavirus pandemic, and a further £100m (€110m) to the Football Association.

The EFL would also receive 25 per cent of future Premier League media revenues under the proposals, something its chairman Rick Parry says would help to ensure the long-term sustainability of the competition.

He has publicly supported the proposals, which are also backed by Liverpool and Manchester United.

However, critics of the plans say they put too much power in the hands of the top flight’s big six clubs because of proposed changes to the voting structure, and that it would remove the competitiveness of the league which for years has made it so attractive.

The Football Supporters’ Association has now condemned them in the strongest possible terms.

“We are not defending the status quo but ‘Project Big Picture’ is not the answer,” an FSA statement read.

“Within the proposals there are individual ideas which many fans would back — but in this form it is impossible to disentangle them from outcomes which would be a disaster for the game.

“The Premier League and Government have to step up and deliver an alternative financial package urgently for the EFL and National League. It should cover lost gate receipts and matchday income. And urgently means details in hours, not days or weeks. Days or weeks means clubs going bust.

“Days or weeks means EFL clubs being tempted by the sugar-coated cyanide pill offered up by billionaire owners who do not understand or care about our football culture.”

Parry is understood to be holding divisional EFL meetings with the 72 clubs on Tuesday to talk about the plan, and Premier League clubs will discuss the PBP plans at a shareholders’ meeting on Wednesday.

A source close to the PBP plans accepts the proposals are radical, but insists radical solutions are required to protect the English football pyramid.

They have told the PA news agency that they are intended to serve as a starter for a discussion around the sustainability of the pyramid and the fixture calendar.

Rotherham chairman Tony Stewart stressed the urgency of the situation when he told Sky Sports News: “If things don’t happen soon I know for a fact more than half a dozen EFL clubs will go by the wayside, and I’m not exaggerating.

“If nothing does happen — and I’m talking in the month of October — dire disaster will happen to clubs all around the UK.”

Tranmere owners Nicola and Mark Palios expressed concern over the proposals, with the former sceptical about the level of certainty around the 25 per cent share of revenue being mentioned.

“There are some clear good elements to Project Big Picture but they are hugely outweighed by the downsides that will destroy the game in this country,” she wrote on Twitter.

“Once you’ve given all the power to a small group they can do what they want.

“B teams would be with us in a heartbeat. The EFL would get 25 per cent of the TV money but only after the best of all the games are taken away from TV to be streamed by the big clubs. And what’s to stop them changing the distribution methodology in future, to say 10 per cent?

“We must not be blinded by the short-term offer of a cash lifeline. It’s like someone offering you a million pounds but shooting you soon after.”

Mark Palios called on the Government to intervene, telling the PA news agency: “They can’t stand by and allow the game in this country, built ‘on the shoulders of giants’ and such a major part of the lives of millions, to be sacrificed on the altar of short-term expediency.”

“We are fully in favour of steps which can be taken to address the inequitable distribution of finances between the Premier League and EFL,” Brittan wrote in a statement on her club’s official website.

“Radical change has long been required to create a football pyramid which allows clubs at the lower levels to be sustainable yet be competitive on the field.

“We hope that conversations around Project Big Picture are the first step on this path.”

1 Gerry Thornley: After 32 weeks the Six Nations is back up for grabs
2 Extremes of sweet and sour for Solskjaer as Man United show signs of revival
3 Arsène Wenger: Arsenal was a matter of life and death to me
4 GAA expected to go ahead with championship under Level 5
5 Bennett girding his loins for impossibly unpredictable Vuelta
Real news has value SUBSCRIBE