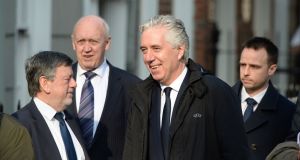 The FAI and John Delaney both say it was a short-term loan but up until Monday they also said the entire board was aware of it. That the association would have to borrow a six-figure sum from its chief executive is widely regarded as inexplicable so an explanation would be good.

On the face of it, this is much less of a story than the €100,000 and many people around the FAI actually knew that the association was paying Delaney’s rent. But it raises important questions about his wider financial relationship with his employer, what he has really been paid all these years and who precisely authorised it.

3) The standard of corporate governance

For years, the allegation has been that the FAI was a one-man show with the board apparently happy to allow their chief executive free rein. Nothing that has happened in recent weeks has undermined that notion but what is the truth?

4) The financial affairs of the association

Delaney was a key figure in the stadium redevelopment project and led its attempt to pay its share of the cost through the sale of overpriced 10-year tickets. When that failed, he rejected persistent reports that the association was in financial crisis. Now, the official account of the €100,000 seems to confirm what the media has been saying all along, but just how bad are things in Abbotstown?

The approach to managing their crisis over the past few weeks has largely consisted of everyone out at the association digging an ever deeper hole for themselves. What we know for sure was that initial claims of all board members being kept informed was not true. But a great many other issues have been touched upon. So, who knew what and when? What meetings were the key issues discussed at and were adequate minutes kept for use in a wider inquiry?

6) What is the culture within the FAI?

There was talk last week between committee members and the Sport Ireland representatives about whistle-blowing policies in other organisations but current FAI employees and those who have passed through talk about the fear of voicing criticisms or simply being suspected of it. How can an organisation in receipt of substantial public funding justify treating its staff and other stakeholders like that?