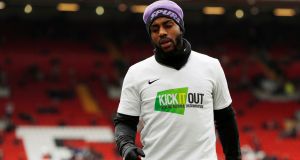 Tottenham’s Danny Rose said he could not ‘wait to see the back’ of the game because of the racism afflicting it. Photograph: Reuters

Pep Guardiola does not want Danny Rose to quit football because of the racism he has suffered and Manchester City’s manager believes it is better to fight the issue from within the sport.

This week the Tottenham Hotspur left-back stated he could not “wait to see the back” of the game because of the racism afflicting it yet Guardiola said: “Danny Rose has not to do that [retire] . Next Tuesday, if I see him, I will tell him the best way to fight, to combat this kind of terrible situation, is fighting, being there every day. He’s an extraordinary player.”

Rose was the target of racist abuse during England’s Euro 2020 qualifier against Montenegro in Podgorica last month and has previously suffered it while on international duty.

The Everton manager, Marco Silva, echoed Guardiola’s thoughts, saying: “It is the worst thing I can hear in football [that Rose wants to quit]. It is really sad to hear. I can imagine how much it must hurt him to say it. To see a player feeling like this is sad for all of us in the game. I just hope the situation [with racism] can stop as soon as possible.”

The Professional Footballers’ Association has said the way Rose feels is a “shocking indictment” of how racism is being handled. In a statement, the organisation said: “We have spoken to Danny directly, both after the Montenegro game and again today, to ensure he is aware that we are on his side and here to support him as a union and as fellow professionals. To see a senior England international so disheartened with his profession is a shocking indictment of the current experience of many players worldwide.”

Kick It Out’s head of development, Troy Townsend, added that Rose’s comments are likely to be the starting point for players to up the ante in the fight against racism.

Townsend said that, as long as players feel they are being let down, they will get stronger in taking the matter into their own hands. “The authorities, with all their resources and power, are failing them time and time again,” he said. “So players have little choice but to take matters into their own hands.”