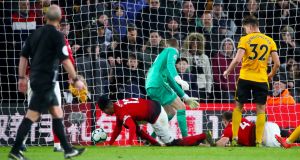 Ole Gunnar Solskjær must be sick of the sight of Wolves. Only 17 days after being dumped out of the FA Cup quarter-finals by Nuno Espirito Santo’s increasingly impressive team, Manchester United suffered a defeat that could have severe ramifications for their hopes of finishing in the Premier League top four.

Scott McTominay’s first goal in a United shirt gave them an early lead, but the evening unravelled badly for them thereafter. Diogo Jota’s eighth goal of the season, set up by Raul Jimenez, hauled the home team level after a poor error by Fred, and United were forced to play the majority of the second half with 10 men after Ashley Young, already on a booking, recklessly lunged at the Wolves scorer. Mike Dean wasted little time in brandishing his 100th Premier League red card.

The sense that United had contributed to their own downfall was reinforced 13 minutes from time, when Chris Smalling ended up nudging the ball over the line with his hand after Jimenez had tried to nod home.

“Can we play you every week,” chanted the jubilant Wolves supporters, who will travel to Wembley on Sunday for their FA Cup semi-final against Watford with a spring in their step.

After being unhappy with the sloppy way that United started against Watford on Saturday, Solskjær could have no complaints here. Jesse Lingard’s attempt to take on the Wolves team straight from kick-off – he skipped past several challenges before shooting tamely at Rui Patricio – was a sign of things to come.

United were excellent in the opening 20 minutes and got their reward with McTominay’s fine goal. If anything, they should have had more to show for their superiority in that period, with two presentable chances squandered either side of the breakthrough. The first fell to Romelu Lukaku, who met Diogo Dalot’s right-wing cross with a powerful header. Only six yards out, Lukaku should have scored but he nodded straight at Patricio, who was able to make an instinctive save.

The Wolves goalkeeper would be beaten eight minutes later, however, when McTominay, who was one of six changes to the United team, opened his account. A clutch of Wolves players were drawn to Fred, expecting him to shoot, but instead the United midfielder intelligently offloaded the ball to McTominay, who drilled a low shot from 25 yards that flew through Willy Boly’s legs and into the far corner.

Lukaku, starting up front in place of Marcus Rashford, who had been ruled out with an ankle injury, then came close to creating a second. His lobbed pass picked out Lingard, whose header was well directed but lacked power and Patricio parried the ball away.

It was a reprieve for Wolves and one that seemed to spark them into life. Suddenly, the home team started to play with much more intensity. Jimenez, with the angle against him, wildly thrashed a right-foot shot wide of the near post little more than a minute before United gifted Wolves an equaliser.

It was an awful goal for them to concede and not a moment that Fred will enjoy watching back. David de Gea’s pass found the Brazilian in space about 30 yards from goal but his touch was loose. Joao Moutinho pinched possession, Leander Dendoncker shifted the ball on to Jimenez, and the striker’s lovely pass with the outside of his boot released Jota, who beat De Gea with the minimum of fuss.

Confidence oozed through the Wolves team, who now looked dangerous every time they attacked. Dendoncker wastefully lifted Matt Doherty’s cutback over the bar from the corner of the six-yard box, and Ruben Neves forced De Gea to quickly back-pedal to hold on to a spectacular volley. Although the complexion of the game had now changed, Lukaku could have restored United’s lead on the stroke of half-time with a shot that he screwed beyond the far upright.

McTominay also had a decent chance to score just after the restart when his diving header, after Paul Pogba had flicked on Lukaku’s cross, was just about kept out by Patricio’s right hand. Then came the flashpoint involving Young, who had been playing almost as a right-sided centre half in a three-man defence.

Trying to retrieve McTominay’s wayward pass just inside his own half, Young lunged with his right boot, making contact with the ball first but clattering into Jota with his follow-through, which was dangerous and out of control. Already on a yellow card, his dismissal was a formality. Jota was substituted not long afterwards, although he looked to be moving freely enough as left the pitch.

United had appeared to be coping reasonably well with their numerical disadvantage, but then came that calamitous winning goal. Jimenez, challenging Phil Jones, managed to just about get to Moutinho’s deep cross and Smalling pushed the ball over the line with a hand. Ivan Cavaleiro, thundering a shot against the bar, almost made it 3-1 in injury-time. – Guardian