Cork will need all their energy to repel title-hungry Rovers 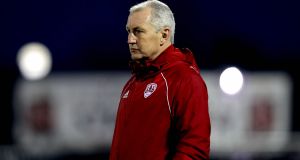 John Caulfield is expecting to see a more expansive game from Shamrock Rovers when the league leaders visit Turner’s Cross on Friday night.

And with Rovers seven points clear at the top, albeit with two more games played, the Cork City manager believes his opposite number Stephen Bradley finally has the makings of a title-challenging side this season.

“In the last couple of years coming down here, and particularly last year, they played cagey and got a draw,” said Caulfield of Rovers.

“This year, they’re high-flying and scoring lots of goals. You’d imagine they see this as an opportunity to put more distance between us and them.

“For the last couple of years, Stephen has been building for a title challenge. This seems like the year it could happen, with the way they’ve started.

Rovers travel south without defender Sam Bone, out for a month with a hamstring injury sustained in their EA Sports Cup defeat on penalties at First Division Bray Wanderers on Monday night.

Sent off in last week’s defeat at Bohemians, St Patrick’s Athletic striker Mikey Drennan, who has scored the only three league goals they’ve managed in the league this season to date, is suspended as the Inchicore side look to stem the flow of four straight defeats when champions Dundalk come to Richmond Park.

Gary Shaw is set to deputise for Drennan. Winger Dean Clarke is ruled out with concussion while Brandon Miele faces a late fitness test on a foot injury sustained at Dalymount Park last Friday.

“We’ve deserved more for our play recently and a win [on Friday night] would certainly give us a lift.”