‘I’m not his father,’ says Manchester City manager, as the team goes for quadruple 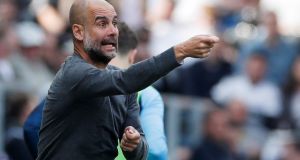 Pep Guardiola has voiced his disapproval after a video emerged of Benjamin Mendy in a Manchester nightclub at 3.30am on Saturday.

Guardiola has stated Manchester City may target a left-back this summer because of the 24-year-old’s injury record, and the Frenchman’s behaviour could possibly further affect his future at the club.

Mendy, who was not in the team for Saturday’s game at Fulham, took part in training later in the day, but the incident may test Guardiola’s patience with the defender, who was signed from Monaco for £52 million in 2017.

Guardiola had stern words with Mendy in September after he was nearly three hours late for treatment, having attended an Anthony Joshua world title fight at Wembley the previous night. Two months ago Mendy indicated he was in Hong Kong in an Instagram post, with Guardiola admitting he “definitely” should not have been. It ended with Mendy saying he had been joking.

Asked about the incident last weekend, Guardiola said: “They are old enough to know what they have to do. I’m not his father. I would prefer him to go home earlier but I don’t control the players in that situation. I’m not frustrated, I’m a relaxed guy. It might not look like it but I sleep quite well. [And] yes – he’s fit.”

City remain on course for a historic quadruple, and Guardiola believes his team and supporters can dream about it. “If they want to dream and they want to think it, okay,” he said. “I’m not going to say this, though, because as a manager, from my experience, if you are distracted – this is a problem. Why should you think you can win the quadruple when it’s never happened in this country, with legendary teams like Liverpool in the ’80s, José [Mourinho’s teams] at Chelsea, Arsène Wenger with Arsenal? Nobody did it.

The reality is it is just Cardiff for now. Train and prepare, win the game

“Why should we? Even Alex [Ferguson’s Manchester United in 1998-99] couldn’t and even winning the treble was tough. They had the FA Cup semi-final, which became 10-against-11 because of a red card for Roy Keane and needed Ryan Giggs’s winner.

“In the Champions League final Bayern Munich hit the crossbar two times. United won the league with 79 points – one more than the second-placed team. It was the spirit, desire to win the treble and of course their quality that was the difference. They did it but it shows how difficult it was and the treble happened just once.”

Guardiola is intent on focusing on Cardiff’s visit on Wednesday night. Victory would take City ahead of Liverpool by a point again, with six matches each left.

“The reality is it is just Cardiff for now,” he said. “Train and prepare, win the game and after we recover and then it’s who’s next? That’s the best way.

“In April you are going to ask me this question [about the quadruple], I will answer yes or no but that day is far away.”

Sergio Agüero is unavailable, having not trained for two days, because of a muscle injury.