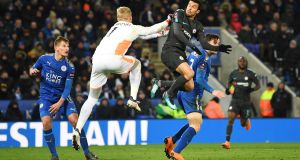 Chelsea’s hopes of claiming silverware from a tempestuous campaign have been maintained.

It took a header in extra-time, summoned by one of the smallest players on the pitch, to see off Leicester City here but, as those in the away end chorused their delight at another imminent trip to Wembley, Antonio Conte could look back at this occasion with a sense of satisfaction. His side, runners-up in this competition last term, can still go one better this time round.

Success at the national stadium, either in the semi-final or final, is unlikely to determine whether or not the Italian extends his stay in south-west London into a third season, but the prospect of a trophy is not one to be sniffed at. This team had departed Europe at Camp Nou in midweek and would have shivered at the prospect of leaving the Midlands with only the pursuit of the top four to sustain interest over the remainder of the campaign.

Pedro Rodriguez’s winner would ensure they march on optimistically while Leicester, deflated at the end having fought their way back into the tie, are left merely targeting a top half finish.

This would prove a slog of a contest. Chelsea’s initial advantage had been established at the end of a rather stark opening period. The visitors had enjoyed plenty of the ball, but the better opportunities had been Leicester’s whether volleyed wide by Marc Albrighton or fizzed at goal by Wilfred Ndidi from distance.

Willy Caballero, retained in domestic cup competition ahead of Thibaut Courtois, had dealt with that comfortably enough and even sprinted eagerly from his goal to ensure Jamie Vardy could not reach a clipped ball from Harry Maguire into the channel. Too often, Leicester’s forays forward had run aground either on the impressive Andreas Christensen, or on a poor touch from Kelechi Iheanacho. The locals, unconvinced by the record signing from Manchester City, were quick to voice their frustration, but would still have expected to reach the break level.

Yet those aspirations were wrecked in a frenzy of counter-attacking as the interval approached. First Chelsea squandered a promising opening courtesy of Alvaro Morata’s skewed attempt to find a team-mate, then Leicester’s riposte lost momentum at Iheanacho’s slack pass to Riyad Mahrez. The Algerian eventually lost possession to Marcos Alonso in the mess that ensued, with Antonio Rudiger calmly prodding clear to Willian who wrestled himself free of Ben Chilwell. Class then kicked in. The Brazilian’s dart up-field prised Leicester apart, with his diagonal sending Morata galloping between and beyond Wes Morgan and Danny Simpson. The striker took a touch, opened up his body and eased his first goal since St Stephen’s Day back and across Kasper Schmeichel into the far corner.

The striker, who had scored in this arena back in September, might have added another from Willian’s centre after the break with the tie suddenly shrugged out of its early slumber. Vardy, untracked by Victor Moses, should have nodded the hosts level only to loop his effort high and wide, with Leicester’s increased urgency forcing the Premier League champions ever deeper. For a while Chelsea resisted and even threatened to prosper on the counter, only to crack at the first occasion their concentration wavered.

Mahrez was permitted to ease beyond Alonso far too easily with his centre prodded at goal by Vardy only to striker Christensen inside the six-yard box. In the confusion which followed the ball broke to Vicente Iborra whose first attempt struck the prone Cesar Azpilicueta, and his follow-up was blocked splendidly by a diving Caballero.

Thereafter, the Argentinean’s luck deserted him. With the six-yard box littered with bodies, the ball spun away from the goalkeeper’s attempt to smother and was rammed home by Vardy. Even then the goalkeeper somehow laid a glove on the shot, but was in no position to keep it out.

Caballero and Schmeichel would deny Vardy and Morata a potential winner before the contest was condemned to the anxiety of extra-time. It would be the substitute Pedro whose influence would tell first, the Spaniard busily collecting inside his own half before shifting possession up-field to Morata and Kante. The Frenchman, using Alonso’s dart down the touchline as a decoy, was offered far too much time to look up and measure his centre and pick out Pedro, unmarked and eagerly infiltrating space between Chilwell and Albrighton.

Schmeichel, too, reacted late with an attempt to reach the cross and the winger, at 5ft 7in, leapt to nod his team’s second neatly over the muddle and Chelsea into the semi-finals. – Guardian service