All in the Game: What a week it was for Jose 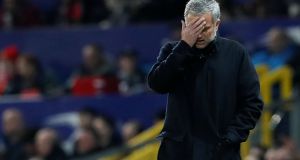 Jose’s week began a little testily: “I heard the worst manager in the history of the Premier League, Frank de Boer – seven games, seven defeats, zero goals – saying that it was bad for Rashford to be managed by me because he would never play. Maybe with him, he would learn how to lose.”

It got worse – although he did offer these comforting words to the United faithful after that Champions League exit: “I’ve sat in this chair twice before, with Porto – Man United out – and with Real Madrid – Man United out. So this is nothing new for this football club.”

Over in Spain, the newspaper AS was paying tribute to his swashbuckling style of football: “It [Sevilla’s win]was done with pure football against Mourinho’s troglodyte model, in which so much money has been invested so that De Gea can hoof a long ball towards Fellaini and Lukaku. Sevilla won and so did football.”

And then Jose saluted his team’s performance in the FA Cup: “Matic was an island of personality, desire and control surrounded by lack of personality, lack of class and lack of desire.”

Apart from all that? The week went well.

“Mourinho is starting to look like a washed-up rock star, one of those guys that goes around holiday hotels for pensioners playing old hits on an organ with the base and the percussion playing on a tape recorder.” – Roberto Palomar, writing in Spanish paper Marca, somewhat suggesting Jose is less than special these days.

Franco Armani was no doubt chuffed last week with his performance for River Plate against their less-than-beloved rivals Boca Juniors in Argentina’s Super Cup, the goalkeeper making a string of mighty saves to keep a clean sheet in their 2-0 win.

And he was most probably just as chuffed when he was told he had been crowned man of the match by sponsors Burger King. The problem was he was literally crowned. Yes, he had to wear a golden crown sporting the Burger King logo while doing his post-match interview.

For some reason we got to imagining how, say, Roy Keane would have reacted to being told he had to don a golden crown advertising a burger chain after one of his man of the match displays. The person giving the order might well have ended up sporting a Whopper of a black eye.

22,300: That’s how many of the 63,000 tickets for May’s Champions League final in Kiev have been reserved by Uefa for their corporate buddies. The finalists get just 17,000 each and only 6,700 are being put up for general sale. The people’s game, don’t you know.

“In a society where everyone is labelled, I’ve got more labels than a jam jar. I’m the only the person that looks like me doing this, so nobody else can imagine what it feels like to be in my shoes.” – Annie Zaidi on her journey to becoming the only female Muslim coach with a Uefa B coaching license.

“He knew even before me lol.” – Sevilla’s Wissam Ben Yedder salutes the Mystic Meg who spookily forecast his slaying of Manchester United in the Champions League.

“I didn’t even know there was a game on. Who watches Scottish football? I was too busy watching real football. Why would I watch a Sunday League competition up North? We’ve got proper football down here.” – Joey Barton on being asked if he’d watched last week’s game between Rangers and Celtic. That’d be a no, then.

“If we are world champions... it’s yes.” – Carlos Valderrama vowing to shave off his legendary hair-do if Colombia win the World Cup. Sounds like he doesn’t have much faith in his compatriots.

That’d be the one that appeared in a list of questions emailed to Spurs fans in the United States by a ‘global media measurement company’ on behalf of the club. “Calling all US Spurs fans: tell us what you think,” it started before asking for help “to increase our understanding of what you think about Spurs and football/sport in general”.

Oddly, there was no ‘are you having a laugh?’ option. Spurs were morto. “The survey questions were compiled by a third party on behalf of the club. The inclusion of this question in a club survey was wholly unacceptable and a regrettable oversight. It has been immediately removed from the survey for any other fans now looking to fill this out. We sincerely apologise to anyone offended by its initial inclusion.”

Whoever wrote it should be tied to the kitchen sink for a month as punishment.

Marouane Fellaini did a brief interview with GQ magazine. He spoke about ‘being labelled a thug’, Jose Mourinho and Belgium’s chances in the World Cup. GQ’s focus, though, was more on his hair, introducing the piece by telling us that “we’re trialling some creative hair choices this season”.

So, they evidently asked Marouane if they could trial some creative choices on his head. And for some reason he agreed. The general consensus about this particular choice? He looks like Mickey Mouse. All you can ask is ‘why Marouane, why?’

The ‘What On Earth Were They Thinking?’ moment of the week: That’d be the one provided by men’s fashion retailer Topman. Appearing on their website was a shirt with ‘96’ on the back over the line “What goes around comes back around”, with ‘Karma’ printed on the sleeve. Seriously.

Topman said the design was “inspired by a Bob Marley track (‘What Goes Around Comes Around’) with the number referring to the year of re-release”, but as Louise Brookes, whose brother Andrew died in the Hillsborough disaster, told the BBC, ‘karma’ and ‘what goes around comes around’ “are used by some rival fans who claimed Hillsborough, where 96 Liverpool fans died, was ‘God’s punishment’ for the Heysel disaster”.

Topman apologised and removed the shirt from their website. The BBC asked London College of Fashion’s Professor Kate Fletcher about the decision to put it there in the first place. Her mind, she said, was “boggling”. She wasn’t alone.

Poor old Ray Wilkins would probably quite like TalkSport to remove from their website his preview of Manchester United’s Champions League tussle with Seville. Lest ye forget:

“I think it’s tricky, but I don’t think it’s anything that should really stand in their [United’s]way. Where would Sevilla be in the Premier League? Bottom six? Probably. I don’t see Manchester United having too many problems.”

It was a couple of years back that Ray declared: “The Champions League without Manchester United is a bit like China without rice.”

And here it is, rice-less again.