Championship round-up: Matt Doherty on the double for Wolves 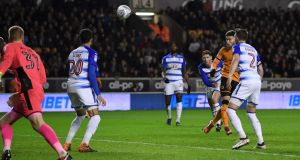 Republic of Ireland defender Matt Doherty scored twice as Wolves got their Premier League promotion push firmly back on track with a convincing 3-0 Championship win against Reading at Molineux.

Doherty struck in each half, either side of a 58th-minute goal from Benik Afobe, as the league leaders earned a much-needed victory after a run of just five points from their previous five games.

Wolves, who had been hammered 4-1 by Aston Villa in their last outing, dominated proceedings against struggling Reading.

The Royals have now failed to win any of their last eight games and have picked up only one victory in 17 league matches to slip perilously close to the relegation zone.

Wolves finally made their pressure pay off through Doherty, who had also been on target in Wolves 2-0 win against Reading in November.

A long pass from Helder Costa picked out Barry Douglas and his header to the centre of the penalty area was headed home by the unmarked Doherty from 12 yards five minutes before half-time.

Doherty then turned provider in the 48th minute to tee-up Afobe, but the on-loan Bournemouth striker wasted an excellent chance to put the game beyond Reading when he dragged his weak shot wide from close range.

Fortunately for Afobe he soon got a chance to make amends and this time was clinical – making no mistake when he buried his low shot from eight yards after a mazy run by Costa.

Doherty then set the seal on a comprehensive victory with a cool finish from the edge of the area in the 73rd minute after exchanging passes with Ivan Cavaleiro.

Victory ensured they stayed ahead of Cardiff in the race for the title after the Bluebirds won at Brentford.

They came back from 1-0 down to win 3-1 at Griffin Park and strengthen their grip on second spot.

Sol Bamba, Callum Paterson and Kenneth Zahore scored for Neil Warnock’s side after Neal Maupay had opened the scoring for Brentford.

It left a seven-point gap to third place after Aston Villa’s automatic promotion hopes suffered a major blow with a surprise 3-1 defeat at home to QPR.

Ireland midfielder Ryan Manning opened the scoring with a header and Jake Bidwell’s deflected effort put the visitors 2-0 up at half-time.

Luke Freeman added a late third at Villa Park to move QPR up to 15th despite James Chester’s consolation – the defender’s third goal in as many games.

Sheffield United closed the gap to the top six to two points after a 2-0 win over Burton.

Former Shamrock Rover left back Enda Stevens opened the scoring in the first half before David Brooks’s goal after the break helped lift them to seventh.

At the bottom Barnsley inched three points clear of the relegation zone after a 1-1 draw with mid-table Norwich.

Swansea loanee Oli McBurnie celebrated his first Scotland call-up with a neat volley just before half-time only for Josh Murphy to equalise.

Hull also grabbed another crucial win and are now nine points above the bottom three.

The Tigers beat Ipswich 3-0 at Portman Road thanks to goals from Markus Henriksen, Harry Wilson and Jarrod Bowen.