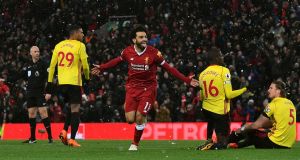 Mohamed Salah’s record-breaking season shows no signs of slowing down as four goals in the 5-0 victory over Watford put him in pole position for the Premier League’s golden boot.

The Egypt international’s first hat-trick for the club took his tally to 36 for the campaign and his 28 in the top flight — four better than Tottenham’s injured Harry Kane — is the best in Europe’s big five leagues.

Not far behind is Roberto Firmino, who marked the best goalscoring season of his career with an exquisite backheel for his 23rd in all competitions against a Hornets side who presented little challenge as Liverpool bounced back from last weekend’s defeat at Old Trafford.

With Manchester United and Tottenham both involved in FA Cup action, Jurgen Klopp’s side moved back into third place, two points either side of their top-four rivals.

It was Salah who stole the show again with his opener after four minutes drawing comparisons with Barcelona’s Lionel Messi — and not for the first time.

The £38million summer signing exchanged passes with Sadio Mane before chasing down the ball in the penalty area and setting off on one of those driving, jinking runs which inevitably leaves defenders on their backside.

Miguel Britos was the unfortunate victim on this occasion, getting a worm’s eye view as Salah fired an angled shot past Orestis Karnezis to become the third Liverpool player to score at least 25 Premier League goals in a single season after Luis Suarez (2013-14) and Robbie Fowler (1995-96 and 1994-95).

It was a goal so good it required a second look and many of Liverpool’s substitutes left their seats on the bench to view it on a pitchside monitor.

If that was good the goal which completed his hat-trick was even better and similarly Messi-esque.

Mane cut in from the right to feed the ball in and despite being surrounded by defenders and falling over Salah somehow managed to conjure a low shot inside the far post.

The middle goal of his treble two minutes before half-time was less individual and more team-orientated as the ever-improving £8million bargain-buy Andrew Robertson exchanged passes with Mane before sliding in a cross which Salah could not fail to convert.

Even at that stage it appeared the game was beyond the visitors, but Firmino made sure five minutes into the second half when he backheeled Salah’s near-post cross through his legs and inside the far post, eclipsing his previous career best of 22 for Hoffenheim in 2013-14.

Roberto Pereya’s inswinging free-kick on to the top of the crossbar was Watford’s only moment of respite as the red tide continued to crash forward and with it, inevitably, came more Salah goals.

After completing his hat-trick with some penalty area trickery the Egyptian rifled home substitute Danny Ings’ rebounded shot to become the first Liverpool player since Suarez against Norwich in December 2013 to net four times in a single game.