Midfielder suffered a medial ligament injury while training with Hull 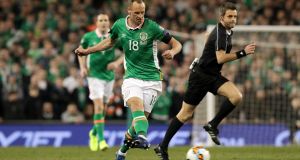 Republic of Ireland and Hull midfielder David Meyler has been ruled out for the rest of the season with a medial knee ligament injury. Photograph: Morgan Treacy/Inpho

Republic of Ireland midfielder David Meyler will play no further part in Hull’s attempt to avoid relegation from the Premier League after suffering a season-ending medial knee ligament injury.

The 27-year-old midfielder, who has made 28 appearances in all competitions for the Tigers this season but none in the last month, sustained the issue in training on Thursday.

Hull said in a short statement on Friday evening: “David Meyler will miss the rest of the season after suffering a medial knee ligament injury during training.

“We wish David well with his recovery.”

Corkman Meyler stepped in to start the recent World Cup qualifier against Wales after James McCarthy pulled up in the warm-ups.

He played 79 minutes before being replaced by Aiden McGeady, picking up a yellow card. He also came on after 23 minutes in the 1-0 win over Austria in Vienna last November after Glenn Whelan went off injured.