Darren Randolph: Three saves to keep Ireland in the running 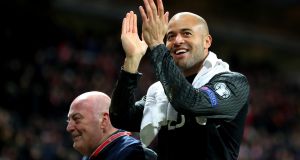 An hour or so after the end of Ireland’s game at Parken stadium, and Darren Randolph is digging deep, trying to remember for a huddle of reporters anxious to move things on just when it was he was last involved in a penalty shootout. He’s struggling. Not since a Milk Cup game in his early teens, he says, and he can’t remember the outcome. Glum faces abound until the 30-year-old suddenly starts playing to the crowd by exclaiming with a smile: “We won . . . and I saved them all!”

After his performance here it would not be all that hard to believe. Randolph was absolutely central to the fact that Ireland flew home to start their preparation for Tuesday’s second leg without having conceded.

There was an element of “let off” about the two first-half incidents into which he packed three decent stops, but his one in the dying seconds, when he turned Yussuf Poulsen’s close-range header over the bar, was outstanding and, after a similar save in Wales, is starting to look like his party-piece.

If the team gets to Russia, in any case, Randolph will have as strong a claim as anyone to being its life and soul.

“Well,” he says with a grin when asked about this, his third straight clean sheet, “I think I got a bit of luck.” He was, he suggests, “just in the right place at the right time” when Andreas Cornelius tried to follow up on his save of Jens Stryger Larsen 12 minutes in and “lucky” when Pione Sisto failed to make more of his inability to push a Christian Eriksen shot to safety 12 minutes later.

“I tried to get it wider, but it’s not the easiest with those balls when they’re moving to try and judge it correctly. It was on top of me and I just tried to get something on the ball to get it out of danger. Luckily enough, he put the rebound wide.”

Randolph, though, brings more than an endless supply of good fortune to this Ireland team these days. After a difficult spell at West Ham towards the end of last season prompted suggestions he might lose his place in the international team, Martin O’Neill again looked lucky to have him here.

The 30-year-old from Bray only got his big break at this level when Shay Given was injured just before half-time in the win over Germany towards the end of the last qualifying campaign. But, for a man goalkeeping coach Seamus McDonagh once suggested might be worryingly laid-back, he has been rather effective at making the shirt his own. In that November 2015 match, he not only kept the Germans at bay but also provided the assist for Shane Long’s winner. Randolph has conceded 15 times in the 18 competitive games he has played since, but a third of those were in the Euro2016 defeats by Belgium and France. Over the course of this campaign, there had already been clean sheets in Vienna and against Wales both home and away before this.

Already 30, he will not catch Packie Bonner or Shay Given in terms of caps won, but if Tuesday goes well he will be firmly on course to match Given’s tally of two major championships. And with qualification for the European Championship more manageable than it used to be, Bonner’s three would look entirely achievable. His current form, at any rate, means his place seems entirely secure despite his old Charlton clubmate Rob Elliot playing these days in Premier League and doing rather well.

The most remarkable thing on Saturday night, perhaps, was the fact that he did not have more to do, although he laughs good-naturedly at the suggestion that he “only” had three saves to make.

You have to keep yourself in the tie and give yourself a chance, which is what we’ve got. We’re still in the tie

“Three’s enough for me,” he says. When asked if he expected to be busier during the game, he hesitates: “No . . . well, maybe, probably. I think I’m going to be busy every game, it depends if I am or not. We didn’t have the majority of the possession or anything but I think we wanted to stay in the tie coming over here.

“The last few games we’ve had, we’ve obviously needed to keep things tight, get wins, and maybe subconsciously it plays a part [in keeping clean sheets]. I couldn’t tell you, I don’t know. But as a team, we’ve been very solid.

“You can’t go away and try and win the game in the first 10 minutes, or the first half. I mean, you have to keep yourself in the tie and give yourself a chance, which is what we’ve got. We’re still in the tie. Win on Tuesday and we go to Russia – it’s as simple as that.”