Ball in Ireland’s court after draw in Denmark

Emmet Malone at the Parken Stadium 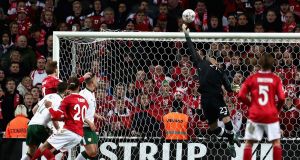 Darren Randolph of the Republic of Ireland makes a save against Denmark. Photograph: Catherine Ivill/Getty Images

Martin O’Neill’s players may not have delivered on his stated ambition for them in this game by grabbing an away goal, but they return to Dublin in good shape after holding Denmark to a scoreless draw in this World Cup playoff’s first leg. More than that, Ireland looked almost comfortable at times against a side that proved more toothless that we had expected.

There were a few scares for the visitors and Darren Randolph had to produce a point blank save late on to deny Yussuf Poulsen but for the most part the Danes fired only blanks at Irish side that worked tirelessly once more, even if they never came close to imposing themselves on their opponents in the way they had against Wales.

The Danes, it seemed, were stuck in third gear for the best part of the night, or prevented, perhaps, from getting out of it, as Ireland, produced a generally disciplined performance. O’Neill’s men had one or two careless moments, memorably just over an hour in when first Shane Duffy then Harry Arter let loose with pointless balls into the home side’s territory while under no pressure at all, but there was nothing to compare with the couple of clearcut chances that the hosts passed up in the earlier stages.

Randolph played a part in keeping them at bay both times but if Tuesday does not go well for his side then Age Hareide might point to the opportunities missed here by Andreas Cornelius and Pione Sisto as decisive.

There were fleeting glimpses of the sort of football the home side needed to produced in order to unsettle the Irish but on those occasions their final ball was poor as when, shortly after he came on, Nicklas Bendter’s looping cross allowed the Irish goalkeeper to gather fairly comfortably despite being surrounded by red shirts.

As Robbie Brady began to find his range with set pieces after a poor start, the potential for the visitors to grab something against the run of play seemed to grow. The closest they actually came to capitalising on one of the Dubliner’s long, lofted frees into the area was when one arrived a fraction of a second too late at the feet of Ciaran Clark who couldn’t quite control it.

Later, in the dying minutes, Duffy finally got on the end of one but with his back to goal his flicked header was almost straight at Kasper Schmeichel. The Danes then went down the other end and pressed for a late winner until the final whistle but the Irish stood tall and Poulsen’s header was as close as they came.

It was another good night for O’Neill who, as he tends to, had sprung a bit of a surprise with his team selection as Callum O’Dowda’s inclusion facilitated the use of Jeff Hendrick to anchor midfield alongside Arter. But the pattern of things was much as he, and we, would have expected, with the Danes dominating in midfield where everything, it seemed, was supposed to go through Christian Eriksen.

For the most part they were frustrated effectively, with Ireland working hard to ensure there were always bodies between the locals and Randolph’s goal but there were those couple of times when the defensive screen slipped spectacularly. In truth, O’Neill’s side could count themselves fortunate not to have been at least one goal down at the break.

In the first instance a long angled ball from Simon Kjaer enabled Jens Larsen to get behind Cyrus Christie though the left back’s driven shot was saved well enough by Randolph. The ‘keeper was then swiftly on his feet again although Cornelius never should have allowed hom the opportunity to stop his follow up.

Ciaran Clark had to take a good deal of responsibility for the second with the centre back carelessly turning a long, low punt by Kasper Schmeichel to Eriksen who seized the opportunity to drive forward and shoot. Again, Randolph saved but not cleanly and when those around him could manage only a partial clearance Sisto was presented with an opportunity that he squandered by firing wide from barely 10 yards out.

That, though, was about the size of it from a Danish point of view until the dying minutes when Randolph finally had to make a save of note again.

For their part, Ireland only started to show some tentative sign of posing a threat in the spell immediately preceding the interval with O’Dowda having a shot blocked down before the team’s first real attacking move ended with Christie rounding Larsen impressively before having his close range shot smothered by Schmeichel.

They did nothing really to deserve a goal but then Eriksen was a little flattered by his Man of the Match award. Hie and his team mates will have to be better than this to win in Dublin. That, of course, is entirely possible but with the tie very finely balanced this was just about Ireland’s night.