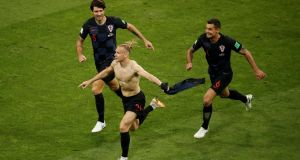 Croatia defender Domagoj Vida has escaped a ban after he and former player Ognjen Vukojevic dedicated their penalty shootout win over Russia on Saturday to Ukraine.

In the video, which has been widely circulated on social media, Vida shouts “Glory to Ukraine” in Ukrainian and Vukojevic says “this victory is for Dynamo and for Ukraine” in Croatian.

Vida, who scored a header in extra time to give Croatia a 2-1 lead and a penalty in the shootout, and Vukojevic both played for Dynamo Kiev and the latter still works for the Ukrainian club as a scout.

“Glory to Ukraine” is the war cry of the Ukrainian army but has also become more widely associated with the simmering conflict on the country’s eastern border with Russia and in Crimea, which Russia has claimed since 2014, despite international condemnation.

A Fifa spokesperson said: “We can confirm that Fifa’s Disciplinary Committee has sent a warning to the player Domagoj Vida due to his video statement following the 2018 Fifa World Cup match between Russia and Croatia.”

Section 54 of Fifa’s disciplinary code states anyone “who provokes the general public during a match will be suspended for two matches and sanctioned with a minimum fine of 5,000 Swiss francs”, which is nearly €4,300.

A two-match suspension would have ruled the 29-year-old Vida out of Wednesday’s semi-final against England and subsequently ended his tournament.

However, the video was taken after the match and the defender – who has been linked with moves from Turkish club Besiktas to several Premier League sides, including Liverpool – goes on to say he was only joking and “the victory is for Croatia, no politics”.

Fifa had set a precedent for not applying section 54 in this tournament by only fining Swiss trio Stephan Lichtsteiner, Xherdan Shaqiri and Granit Xhaka for their ‘Albanian eagle’ goal celebrations against Serbia in the group stage.

Messi: ‘it never occurred to me to leave and does not now either’ 14:28
Wales and France name their teams for Six Nations clash 14:19
Roger Federer to miss French Open after knee surgery 12:45
Connacht make four changes to their pack for Edinburgh clash 12:46
Niall Scannell captains Munster side for Zebre challenge 13:56

1 Six Nations: Ireland v England all you need to know guide
2 Andy Farrell ticking all the boxes in advance of England showdown
3 Owen Doyle: Day of the jackal may be coming to an end
4 Ireland wary of Peyper calling the tune as they head for Twickenham
5 Leinster make eight changes for trip to take on the Ospreys
Real news has value SUBSCRIBE
Crossword Get access to over 6,000 interactive crosswords