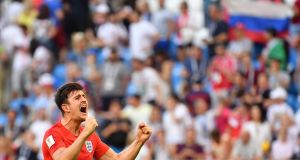 The time might have come for us all to be generous and say ‘well done you lot’. Our neighbours are now, you’d have to be thinking, World Cup winners-elect, it’s just a case of dotting the i’s and crossing to John Stones or Harry Maguire’s head and football will be home and hosed. Granted, Belgium, France and Croatia/Russia might say ‘yoo hoo?’, but as The Dunph put it, “the stars have aligned”.

And he was very happy about that. Although you couldn’t quite see with his jacket, you could only guess that he had three lions on his shirt, so enthusiastic was he about their World Cup Odyssey. “England is special, we love them, Darragh,” he pouted, “I hope they win - and I think they will.”

Meanwhile, Keith Andrews was wearing a waistcoat, so that was his colours nailed to the mast of the HMS Southgate. All they needed was Ian Wrightie Wright and we’d have thought we were watching ITV.

Liam? Well, he momentarily put the frighteners on us.

A nation held its breath.

A Lineker-like pledge to appear on our tellies in his underpants?

Over on the BBC, meanwhile, Gary was welcoming Jurgen Klinsmann to the party with a “fussball kommt nach hause”, which brought a mighty giggle out of his guest, while Alan Shearer was urging everyone at home or in the pub to “shout, scream, cheer for England - because they can hear you”. It’s around 2,700 miles from Newcastle to Samara, so this was unlikely to be true, but as a mood-setter it was grand.

Off we went, the early stages of the game resembling an encounter between, say, Burnley and Crystal Palace. Then the ref gave a handball against Andreas Granqvist, which Guy Mowbray thought was harsh, Martin Keown telling us at that point that he and Guy were in the same restaurant as the ref, Bjorn Kuipers, the night before and he was eating his steak rather “aggressively”. The viewers, no doubt, thanked Martin for that information, without really understanding why he shared it.

Soon after. A corner for England. Sweden appeared to be unaware that they’re quite good at them. Goal. Bullet. Maguire. Guy combusted. “If one Harry doesn’t get you, the other one will!”

“LET’S BE NICE AND CALM,” Martin bellowed, before mislaying his mind. “There’s a Bobby Moore statue outside Wembley - Harry Maguire’s presence in this team is almost as big as that statue.” And then he ensured that he’ll need an armed guard next time he visits the Leicester region by suggesting that Harry might get a move to a big club after the World Cup.

Mind you, there were no kind words from Martin for those who might have opted to curl up with a novel instead of tuning in. “If you’re at home reading a book, you need to get a life.”

Half-time, a goal up. Guy told us to go and have a cuppa but to come back because “England still need you to send them victorious”, so that’s what we did.

Second half. Dele Alli, 2-0. Then Jordan Pickford made a couple of very excellent saves and Guy noted that nobody in England had heard of him until a couple of weeks ago, but now he was front page news. “Well, his family know who he is,” said Martin, which you’d hope would be true.

Sweden refused to make a game of it so that was that. “I’ve got a feeling tonight’s gonna be a good night,” said Guy who should think about writing a tune with that line included, it’s a good one.

Bulldog Dunphy was jubilant. “I don’t think either Russia or Croatia will live with them!”

But then Liam attempted to halt his chariots by suggesting that England were no great shakes, they’d had an easy path, and if they ended up meeting Croatia in the semi-finals, they’d lose.

“I would say that’s a bit begrudging, Liam,” said Bulldog, who vowed to have a meaty bet with Liam over the outcome of England v Croatia if the pairing ever came to pass. He did, though, concede that England would lose to Belgium if they met in the final, but they’d beat France. “And that’d be the end of Brexit.”

The Daily Mail would have conniptions. Not that Eamo was worried about upsetting them. “Southgate’s a very intelligent guy. He reads The Guardian - before the Daily Mail.”

Whatever he reads, the lad is heading for a knighthood.

1 Tianna Bartoletta: ‘After you’ve gotten your medal, you become black in America again’
2 Betting shops face uncertain future as they prepare for Monday reopening
3 Premier League stadiums to be divided into red, amber and green zones
4 Sports bodies must keep electronic records of participants as training sessions resume
5 Sideline Cut: Marcus Rashford proves himself a leading man off the pitch also
Real news has value SUBSCRIBE
Crossword Get access to over 6,000 interactive crosswords