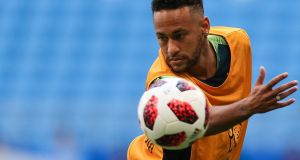 Neymar during a Brazil training session ahead of the Round 16 match against Mexico. Photograph: Buda Mendes/Getty Images

Tite was expounding the need to make good use of his squad players when he landed upon one of his favourite metaphors. “The pack needs the wolves,” the Brazil manager said, not for the first time. “Sometimes you need wolves of different characteristics.”

Whether on the pitch or away from it, the scale of Brazil’s travelling retinue leaves little to chance. To preview today’s tie against Mexico they presented the assistant manager, Silvinho, and the fitness coach, Fábio Mahseredjian, alongside Tite and his captain, Thiago Silva. Mixed in with the noise and clamour of the world’s most insistent media entourage, it almost seemed smothering: so many faces, so many voices, a truckload of competing demands and the sense of something far bigger than everyone else present.

Brazil have not consistently inspired that sense of inferiority in the modern era but there is a feeling among players and management that things are falling into place. It certainly did not hurt their cause that, two hours after their brain trust had finished holding court, Spain were the latest of their rivals to fall flat, and by then the message had already been put out that the Seleção do not expect much let-up from here.

“I think our evolution has been impressive since the first match,” Thiago said. “We are well-prepared and planning to progress to the quarter-finals. The coach provided us with all the necessary tools; we have plan A and plan B. We hope that [Monday] will be a wonderful day, and that Neymar will be as inspired as everyone else.”

The latter has, so far, certainly not been a given. In the win over Serbia, comfortably Brazil’s best performance of the group stage, Neymar operated so obediently that it almost seemed appropriate to reach out and ask whether he was sickening for something. “His average performance exceeds his team-mates’ performances … but this figure is still not high enough for Neymar,” Tite said, pointing out that he needed to play more games before his recovery from a metatarsal fracture was complete.

Brazil have got by in the meantime, Philippe Coutinho becoming the tournament’s most beguiling No 10 and Paulinho, among others, to step up, and if Tite is given to repetition he would be happy for his team to exhibit a similar trait.

“There will be tweaks, but overall an expectation that our team continues to play as in the last match,” he said of the approach against Mexico, who should be beaten if Brazil can raise things a notch above that but have already, in defeating Germany, shown how to punish underperformers.

The only notable absentee will be Marcelo, who departed early against Serbia with a back spasm and will not be risked. Mahseredjian and Tite described, between them, the process for ruling on the left-back’s fitness in minute detail, but the gist was that the coach did not feel he could play a full game, particularly in heat that is likely to exceed 34 degrees.

The expectation had, after the first set of fixtures in a competition that has given short shrift to confident predictions, been that Germany would provide Brazil’s opposition in Samara. “Germany belongs to the past, you cannot revert to the history,” Thiago said in response to that observation; at least the shadow of Belo Horizonte will not be looming now and Brazil can concentrate upon more gettable foes.

Mexico intend to give them a game and their manager, Juan Carlos Osorio, said he would not break from his model of fielding five attacking players. “We will try to keep possession of the ball and I believe we can be better at it,” he said. “Our intention is not to stay behind the ball all the time. We don’t want to stay very deep; they are very good in the last third and always score.”

When it clicks for Mexico they crackle, fizz and thrill; no rival has yet produced a counterattacking performance to emulate that of Hirving Lozano, Carlos Vela, Miguel Layún and Javier Hernández against Germany.

They are rarely clinical enough, though – and, as Sweden showed to devastating effect two games later, have a major wobble in them when pressed physically.

If Brazil are pleased to be without psychological baggage, then Mexico are dogged by constant reminders of six consecutive last-16 exits; their Olympic side did beat Brazil in the London 2012 final but at senior level they have not scored against them in three meetings since.

“Football always gives you an opportunity to win,” Osorio said, pointing out that the mould for underdog stories has been well cast in Russia.

If Mexico can block out the noise, they may run Brazil close. For Tite’s pack of wolves, though, negotiating their way through the pandemonium their presence brings to a major tournament should be second nature.

1 Gordon D’Arcy: If Farrell can tap into our self-worth, we’re all on a winner
2 Winds of change as Ireland name a refreshed team, picked on form
3 Ireland’s 10 Test matches this year will decide World Cup ranking
4 Who is Caelan Doris? Meet Ireland’s newest rugby star
5 Big paycheques lure the world’s best to Saudi Arabia
Real news has value SUBSCRIBE
Crossword Get access to over 6,000 interactive crosswords