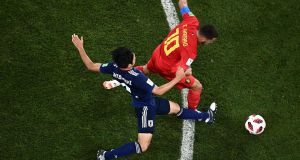 It took Roberto Martinez a while to react against Japan and realise physicality, rather than guile, would help Belgium overturn a 2-0 deficit and make it into the quarter-finals – with the double-introduction of Marouane Fellaini and Nacer Chadli making the difference.

Brazil, however, will be less likely to crumble under the weight of an aerial bombardment – meaning a purer footballing test awaits the Red Devils. And on paper, Belgium have the first XI to go toe-to-toe with the Selecao in Kazan.

Kevin De Bruyne was one of the Premier League’s best players last season, but he has struggled to assert a similar influence for the national side – often playing on the periphery after being deployed in a much deeper role. Eden Hazard, however, has been Belgium’s standout player thus far in Russia – and can rival Neymar as the bona fide attacking star on show on Friday.

Belgium’s ability on the counter – highlighted by their stunning late winner against Japan – will be key against Brazil. Hazard has the ability to pick the ball up deep and run at defences, roaming around the front three and making sharp incisions with his electric pace and low centre of gravity. If the Chelsea forward can find the groove in Kazan – and both he and Romelu Lukaku are on the same wavelength – then Belgium can secure an era-defining result against the five-time winners.

Without wanting to get too ahead of ourselves by writing the obituary for Lionel Messi, France’s 4-3 win over Argentina did have a feel of the changing of the guard about it. Kazan was lit up by a number 10 - but not the one many people expected.

19-year-old Kylian Mbappé didn’t come into the tournament as some sort of hidden gem or selection gamble – after all, he is already the second-most expensive player in history. But his performance in the last-16 was confirmation of what many suspected – he is the player set to take the mantle of the world’s best when Messi and Cristiano Ronaldo finally wane.

Mbappé was jaw-droppingly good against Argentina, combining frightening pace with ice-cool finishing and the fearlessness of youth. Uruguay have been excellent defensively so far in Russia, with Diego Godin and Jose Gimenez seamlessly transferring their peerless Atletico Madrid partnership onto the international stage. However, in Mbappé France possess the perfect weapon to breach the Uruguyan wall, by getting down the outside or tearing down the channels. An intriguing battle awaits.

1 James Ryan injury could open the door for Ryan Baird
2 Ken Early: Frank Lampard’s problems start at number one
3 Derry City get back up and running at Richmond Park
4 Lockdown hiatus may afford way back for Waterford hopefuls
5 Shane Lowry finds some welcome form as US PGA looms
Real news has value SUBSCRIBE
Crossword Get access to over 6,000 interactive crosswords