From Russia with Love: Don’t Evra go to lunch at Ronaldo’s gaff 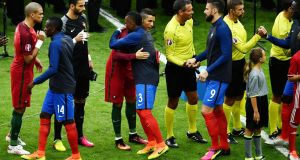 Cristiano Ronaldo and Patrice Evra hug prior to the Euro 2016 final between Portugal and France at the Stade de France. Photograph: Dan Mullan/Getty Images

When it comes to telling anecdotes about Cristiano Ronaldo, Patrice Evra is the undisputed king. First, on an ITV podcast, there was the one about Ronaldo being so upset about losing a table tennis match to Rio Ferdinand that he sent his cousin off to buy a table tennis table, then trained for a fortnight and asked for a rematch. Which, of course, he won. That, said Evra, is why he’s not surprised Ronaldo wants to win everything in football. “Because he is an angry man!”

Better still was his story about being invited to lunch at Ronaldo’s home. “At the table there was only salad and plain white chicken, so I was like ‘okay...’ And water, not any juice. We started eating and I was thinking some big meat would be coming after that, but there was nothing. He finished and started playing with a ball, doing some skills. He said, ‘let’s do some two-touch. ‘I was like, ‘can I just finish eating?’ He said ‘no, no let’s play two-touch’. So we start playing two-touch. After that he said ‘let’s go to the pool to swim’, [and then] after going in the jacuzzi, the sauna, I’m done. So that’s why I would recommend to anyone when Cristiano invite you to his house, don’t go. Just say no because this guy, he’s a machine, he doesn’t want to stop training.”

A man who doesn’t do lazy lunches.

Lothar Matthäus is doing his very best to encourage Mesut Özil ahead of Germany’s now critical second group game against Sweden on Saturday following their defeat by Mexico.

From his Bild column:

“What displeases: His body language is negative. He is in the game without joy. I often have the feeling that on the pitch Özil doesn’t feel comfortable in the DFB jersey, is not free – almost as if he does not want to play. There is no heart, no joy, no passion . . . for a year of two, he has played at a level that does not justify the free ticket of Jogi Löw.

“And what I have observed after the anthem in Moscow, made me very angry: 10 German players have waved into the audience, given the fans a sign. Only Özil didn’t. This makes it obvious to me: he doesn’t understand why there are such great discussions in Germany about him. He’s unaware of what people in Germany expect from a national player.”

Apart from that, Lothar’s chuffed with the fella.

Les grand fromages: Russian cheesemonger coining it in with France

If you were wondering why France looked a little sluggish in their opening game against Australia, ESPN may have found the answer. They tracked down the man who supplies the French squad’s chef with cheese at their training base in Istra. The cheesemonger chose to remain anonymous, which was probably wise – it sounds like he’s making a mint.

If they win the World Cup, every Dairy Board on the planet will faint from sheer ecstasy.

When Harry became Sally: Mirror, Mirror on the wall

Oddest Thing Spotted In A Newspaper So Far This World Cup: That would, without rival, be the Daily Mirror’s quiz/feature type thingie entitled ‘10 of England’s World Cup players have been transformed into women – can you identify them all?’

Why, you’re possibly wondering, have they been transformed in to women? Because the Mirror got hold of an app that does just that. “So, considering that it’s World Cup season, we’ve decided to transform the England team into women.”

It’s an image you’ll never be able to unsee. (hint: S/he scored twice against Tunisia).

Instagram Exchange of the Week: That’d be the one between Chelsea team-mates Thibaut Courtois and Cesc Fabregas, the latter apparently still recalling the time back in March that Lionel Messi scored twice by putting the ball through the Belgian’s legs in their Champions League meeting.

As spotted by Football.London, Courtois posted a photo of himself saving from Panama’s Michael Murillo with his legs during Belgium’s 3-0 win on Monday.

Fabregas: “It’s about time you closed your legs”.

Lewandowski makes Emil of pretending he’s not a football star

Were you ever in a restaurant and were completely convinced that you saw Robert Lewandowski at a neighbouring table, but when you approached him he denied he was Bayern Munich’s Polish striker, just a fella called Emil?

“I don’t use it that much, but it is helpful when we are with friends somewhere,” he told the Guardian. “For example, in a restaurant, we talk and laugh, but don’t use ‘Robert’ or ‘Lewy’. And in that situation, I’m Emil. If someone thinks they have recognised me, and ask if I am Robert Lewandowski, I simply say ‘Sorry, it’s a mistake, I just look like him. I’m Emil, not Robert.”

It was yer man after all.

Costa fortune: Diego’s happy Griezmann is staying at Atletico . . . to a point

How happy is Diego Costa about Antoine Griezmann’s decision to stay with Atletico Madrid? Very. But there’s a little bit of envy there too:

“I knew he identified a lot with us, with the fans, with the people . . . he knows we loved him so much. He is a boy who suffers and has a very nice heart, who has a lot of feeling.”

“The bastard will now be paid good money!”

“I remember telling my team-mates: he is so shit!”

Rafael van der Vaart on his first assessment of a young Harry Kane when he saw him training at Spurs. What’s it they say about first impressions?

That was the BBC’s audience for the England v Tunisia game (for TV and their iPlayer), compared to 13.1 million for the royal wedding. “When Harry beat Harry,” as Gary Lineker put it.