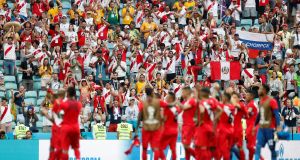 It would, if we are honest, have been a remarkable achievement if Bert van Marwijk had steered Australia through the group stage six months after taking charge, and the final Group C standings offer an accurate reflection of where they currently are.

As in their previous two outings they made a game of things here and, with more quality in attack, might have prolonged any element of doubt that surrounded matters while Denmark and France slugged their way to a dour draw in Moscow. But they look like a team caught between eras and, up against opponents who did not let their own early elimination spoil a good time, were comfortably second best. André Carrillo’s thrilling finish gave Peru’s legion of new admirers something tangible to remember their tournament by and Paolo Guerrero, whose doping ban became a global cause celebre in the weeks leading up to it, provided a storybook ending to their adventure with a neat effort that brought the house down inside a muggy Fisht Stadium.

If Peru had nothing to play for then the message did not transmit to their fans, whose speckled red and white mass filled the majority of this dramatic arena and produced an almighty din from the off. They have provided some of this World Cup’s enduring off-pitch spectacles; their team’s approach has been similarly illuminating and the roar that greeted the image of Ricardo Gareca, the manager, on the big screens before kick-off emphasised that nobody was of a mind to confuse disappointment with failure.

What a noise they produced, then, when Carrillo scored a quite marvellous goal. Australia had, necessarily, started with purpose but were on the back foot when Trent Sainsbury could not get a clean header on a direct ball towards Guerrero. The Peru captain retrieved possession, got his head up and aimed for Carrillo, who was making ground towards the right corner of the penalty area. The delivery was perfect; the volley, firm and low, was an exhibition of technique and it was probably not the time to remind anyone that Peru had wasted far easier chances in games of greater consequence.

Australia claimed Guerrero had been offside in the buildup. Replays showed it was close but the linesman, acting according to pre-tournament edict, kept his flag down and there was no sign of VAR. They had already enjoyed a slither of luck when Mile Jedinak’s ugly, neck-high challenge on Christian Cueva was deemed worthy of nothing beyond a booking. It was reckless at best and, had any heavier punishment been inflicted, Australia would have been robbed of their sole source of goals in the first two games. Both of those had come from penalties but they showed a reasonable degree of devilment in seeking parity through open play.

Most of it came through Tom Rogic, who had begun as if in the mood and almost equalised on 27 minutes when a leggy, slaloming run through the Peru defence brought a shot that Pedro Gallese repelled. Rogic then cut Peru apart with a slide-rule pass for Robbie Kruse and the ensuing cross, placed right in front of the posts for the onrushing Mathew Leckie, would have brought maximum reward if Anderson Santamaria had not appeared from nowhere to limit the damage to a corner.

This was all quite easy on the eye but five minutes after half-time the difference between the teams had been laid bare. At one end Tomi Juric, the game but limited Australia centre-forward, would have been through on goal if he had brought down an imaginative ball from Aaron Mooy but instead made no contact; at the other it was Guerrero, almost immediately afterwards, who reacted first when Cueva’s through pass ricocheted off Jedinak and spun to angle a finish past Ryan.

Who could Van Marwijk call upon now? He went straight for the romantics’ choice and summoned Tim Cahill, who replaced Juric and had a shot blocked in the box within minutes. Daniel Arzani, half Cahill’s age at 19, also came on and for a short-lived period Australia laid siege to the Peru goal.

Aziz Behich thought he had ignited some interest but a goalbound drive deflected narrowly wide. Cahill certainly let Behich know his own views when the left-back failed to find him, standing unmarked, with a volleyed cross. Time will tell whether Cahill, who had not emerged from the bench prior to this fixture, will pull on a Socceroos jersey again; if this was a valedictory appearance then he snarled his way through it in characteristic fashion and Australia will hope to find a younger model with similar punch before returning to this level again.

Cueva hit the post late on, as if to emphasise the teams’ difference in capability when they entered the penalty area, but the latter stages were as much a non-event as the Socceroos’ tournament had transpired to be. – Guardian service