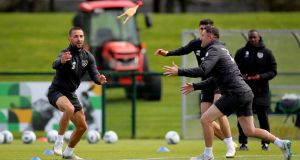 Having had such a settled side for Ireland’s competitive games so far in this campaign, Mick McCarthy will allow a few of his supporting cast a spell in the spotlight against Bulgaria on Tuesday.

It is hard to imagine what any of them would actually have to do to change his thinking for Tbilisi, but failing to give their all, he suggests, will certainly be remembered should one of his regulars be hit by the proverbial bus between now and the middle of October.

The Ireland manager was coy about the scale of change he envisages when it comes to naming his starting line up, but the one he confirmed came as quite a surprise, with AstonVilla’s Conor Hourihane, it seems, set to slot in at left back in place of Enda Stevens.

Ireland’s regular in the position will be suspended for the Georgia game after having picked up his third yellow card of the campaign on Thursday night, and having previously suggested that James McClean was next in line for the gig, the Stoke City player’s performance against Switzerland appears to have persuaded McCarthy that another solution needs to be found as the 30-year-old Derryman’s energy is required further up the field.

Matt Doherty may well be the one he settles on to stand in for Stevens on the actual trip away next month when Ireland will be desperately anxious to capitalise on Denmark’s failure to take all three points in the Georgian capital.

In the meantime McCarthy has decided to try something that seems a little more random, although the 60-year-old is confident himself that it all makes perfect sense.

“He [Hourihane] has all the tools to play there, that’s for sure,” says McCarthy. “He is a very intelligent player. He has a wonderful left foot, and if we can get him further up the pitch so he can deliver crosses, we should get some joy out of that.

“What, is he 6ft? He can defend the far post. Depending on who is up against him, if he has a flying winger can he deal with it? Well, is there anything else at stake tomorrow night? It is about trying to find things out. Why would I not try it? That’s what these games are for. And what if he is amazing?”

McCarthy has, it should be remembered, form on this front having previously spotted the left back in Stephen Ward fighting to get out, but he also has a fallback position where Hourihane is concerned.

“He’s going to get 90 minutes and he might not get that many more before next month. At least I will have had a look at that, and it might be another string to his bow.”

Scott Hogan and James Collins will get their chances too, he says, although presumably as strikers and not necessarily at the same time.

Alan Judge, Alan Browne, Mark Travers and John Egan, meanwhile, are amongst the other Irish players expected to see action from the start with perhaps as few as two of Thursday’s initial line up retained.

McCarthy was asked about having had the option of bringing in a couple of the Under-21s who impressed him in Tallaght recently. Aaron Connolly and Jayson Molumby were the obvious candidates to judge by his comments since, although Conor Masterson, Darragh Leahy and Dara O’Shea all appear to have caught his eye too. However, he had, he suggested, enough to be getting on with rotating his own squad without pilfering Stephen Kenny’s.

A competitive game against Sweden would probably do them more good anyway, he added.

Bulgarian boss Krasimir Balakov, one of the standout members of the country’s great team of the 1990s, will be doing some chopping and changing himself, with up to nine changes expected to the team that lost tamely in Wembley over the weekend, three of them senior debuts, including 37-year-old goalkeeper Hristo Ivanov.

The team is not in a great place just now having lost all three games since Balakov took charge in May – part of a winless sequence that extends back to last October – and drawn its other two qualifiers. This game and the rest of the campaign, it seems, is to be used as preparation for the Nations League play-offs.

“We can still qualify for the European Championships, and so we want to try everyone who we have in the squad,” he said, before going on to heap praise on the home side.

“When we analysed the Irish team I was impressed with the passion and flexibility that the players showed,” he said “The fact that the head coach started with one tactical system and then switched to another during the game…you have to have smart footballers as well in order to make these changes during the game.

“So obviously not only the head coach but the players are super, smart and strict. It’s very important to stress that when working as a national coach you don’t have much time to work so this means that there is a good synergy going on.”

Super, smart and strict, eh? Mick and his men might just start to get it into their heads that they are under-appreciated here at home.

Paul O’Donovan will ‘go with the flow’ as talk turns to Tokyo Olympics 06:35
Neil Lennon ‘won’t walk away’ after Celtic stumble again 06:30
Solskjær praises Pogba after strike sends Man United top 06:31
Andrew Porter ready to lay down a marker at Thomond Park 06:35
Joanne O'Riordan: Why I want to live a bit more like Ted Lasso 06:00