Mick McCarthy in charge, Roy Keane in the headlines – it felt like little had changed 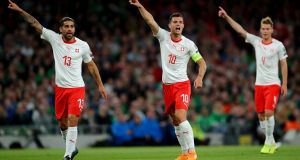 Ireland vs Switzerland in a Euro qualifier at Lansdowne Road, Mick McCarthy on the sideline, Roy Keane making all the headlines. It was almost as though the last 17 years hadn’t happened, and when you consider that John Delaney was running Irish football for most of that time maybe that’s not so surprising.

Delaney’s last major decision was to appoint McCarthy to get us to Euro 2020 and there are signs he has restored some of the qualities we associated with the team the last time he was manager nearly two decades ago. The kind of countries that qualify for World Cups have moved on though, and Switzerland have qualified for the last four.

Their goalkeeper Yann Sommer had provided one of the only non-Keane related items of interest in the build-up, with Irish media reporting that he had described our football as “unpleasant” in an interview over the weekend. McCarthy referred to this in his pre-match press conference, suggesting that the team was looking forward to shutting certain people up.

The word Sommer had used was “unangenehmen”, which does mean “unpleasant”, but in a sense that suggests “uncomfortable” rather than “ugly”. He wasn’t saying that our primitive football disgusted him, he was saying that Ireland are the kind of team that make it hard for you – physically strong, determined at corners and free-kicks, supported by passionate fans, etc.

The Swiss captain Granit Xhaka’s performance last Sunday against Tottenham had reminded you of a high-masted wooden sailing ship that was simultaneously sinking and bursting into flames.

In Dublin he was the picture of serenity as he patrolled the oceanic spaces of the Irish midfield.

Part of the reason Ireland looked so open in the middle was that they seemed to be switching to a back five when Switzerland got the ball, with James McClean dropping back and Enda Stevens tucked in to a more central position.

This gave them the numbers to cover Switzerland’s forwards and ensured there was someone on hand to watch the runs of Switzerland’s attacking right wing-back Kevin Mbabu. The price for the extra security was paid in midfield, where the Swiss always had an extra man and knocked the ball around with ease.

The result was Swiss domination of the ball and a steady trickle of half-chances – a similar sort of pattern to the game against Denmark in Copenhagen.

Ireland’s best chance came from a counter-attack arising out of broken play. Glenn Whelan headed an interception to Jeff Hendrick, who beat one man with a good touch and prodded a pass through to McClean, who couldn’t finish on his right foot.

Despite the consistently deft and intelligent touches of David McGoldrick, Ireland struggled to create much, with McGoldrick’s Sheffield United team-mate Callum Robinson looking uncertain of his role on the right wing.

The Swiss continued to dominate and succeeded in opening Ireland up with a quick ball down the right that took out McClean and Stevens and left Breel Embolo one on one with Richard Keogh, who had been forced out wide to cover. He beat him easily and the cross to the back post would have resulted in a tap-in if Alan Judge had not got back to clear.

Eventually the side that is dominating the game tends to work a clear sight at goal.

Fabian Schär, the Newcastle centre-half, probably did not feature as a major goal threat in Ireland’s pre-match briefings but he had already come close once, capitalising on Whelan’s slip to drive forward and shoot wide from the edge of the box.

There seemed little on when he picked up the ball in the middle of Ireland’s half, with 10 Irishmen packed behind the ball. He nudged the ball right to Xhaka then set off up the middle.

Jeff Hendrick didn’t follow his run, which continued as the Swiss zig-zagged the ball with three first-time passes – Xhaka to Denis Zakaria to Embolo. The forward returned it first time into the path of the arriving Schär, who ripped it into the bottom corner.

McCarthy quickly took off Conor Hourihane and sent on Scott Hogan, switched to 4-4-2 and urged his team to up the tempo. At this point, the shot count was two for Ireland, 14 for Switzerland.

Thankfully football is not a sport where you always get what you deserve. With five minutes to go the ball broke to Whelan, 25 yards out and in space. The crowd screamed for him to shoot and Whelan obliged, hurling a thunderbolt at the Swiss goal that smashed the bar and looped confusingly into the air.

A rattled semi-clearance sent the ball towards the Swiss right, where McClean chased and won it back. His cross hit the back of a defender and dropped in a high arc towards the Swiss six yard box, where McGoldrick and Hogan were waiting with the Swiss defenders. McGoldrick’s head was first to the dropping ball and the ball flew past the helpless Sommer.

Just as in Copenhagen Ireland had equalised when you couldn’t really see it coming. “The atmosphere was fabulous. When the goal’s gone in, our equaliser - that was days of old, Jack’s days . . .” McCarthy said afterwards. Ireland’s retro football might not make the Euro 2020 cut but on Thursday night it was enough to earn our traditional result and send the crowd home happy.

1 Seán O’Brien: Anger over my parents’ break-up never left me
2 Ireland get the job done against Italy to keep alive Six Nations hopes
3 Weekend GAA: Throw-in times, team news, TV details
4 Hugo Keenan and Will Connors: The best of friends, the best of debuts
5 France warm up for Ireland with impressive win over Wales
Real news has value SUBSCRIBE
Crossword Get access to over 6,000 interactive crosswords