Declan Rice says he received threats after switch to England 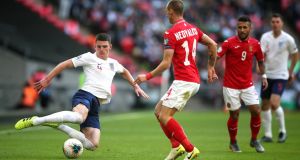 Declan Rice has revealed threats were made against him and his family after switching allegiance from the Republic of Ireland to England.

Having represented the Irish team at youth level and won three senior caps, the 20-year-old made ripples at the start of the year by announcing his attention to switch to the country of his birth.

Rice won his fourth England cap in Saturday’s s 4-0 defeat of Bulgaria and the change of nationality did not go down well with some, leading to some vitriolic online abuse.

“I’ve had people saying they’re going to come to my house...yeah online.

“You click on their profile and they’d just be a fake profile, so don’t know whether it’s true or not.

“But do you know what? I know, thinking about it now, I was never actually scared about it, because always fans are going to be giving me abuse and whatnot over it. You just kind of look at it and laugh, you think, ‘Yeah, all right, as if you’re going to come and do that type of thing’.

“It was tough, there has been some abuse, it was more for my mum and dad really.

“They were more worried about me than anyone else, I was always quite strong minded.

“My mum obviously with me being her youngest, she was always a bit worried. Other than that, I don’t take any notice of it. I just try to keep focused.”

The control and protection, or rather lack thereof, on social media platforms is a hot topic right now given racist abuse aimed at the likes of Paul Pogba, Tammy Abraham and Kurt Zouma.

England forward Marcus Rashford, another targeted online, last week said the fight against racism was “going backwards rather than forwards” and called on social media platforms to get a grip on the issue.

Making individuals accountable for their accounts has regularly been mentioned as a potential step forward and Rice cannot believe the number of fake profiles that are allowed to be created.

“It’s outrageous, even with the racism thing,” he said.

“Even if you look at half these people’s profiles, they’re fake profiles. There’s someone behind it, but they’re using a fake profile and they’re still getting caught out.

“We’re in 2019 and it’s happening week in week out, it’s not good enough, we need to stamp our authority better.”