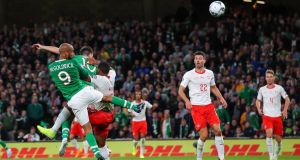 Ireland survived a second-half scare to retain top spot in Group D but as the campaign moves into its final phase Switzerland’s performance here has put that early points advantage firmly in perspective.

On a night that had echoes of the one 17 years ago that ended Mick McCarthy’s first stint in international management, the hosts showed considerable character to come from behind against opponents who generally had the better of things. Thankfully, though, this time there was to be no late sucker punch.

Faced with much the same choice he had to make then – whether to stick or twist with the game tied in the dying minutes – McCarthy showed just what a difference the best part of two decades can make by putting on Alan Browne for his goalscorer David McGoldrick.

He said beforehand that he would be happy enough to push on into the autumn with just one point here and the manner in which it was earned must have made that return seem all the more satisfactory.

The McGoldrick goal that salvaged the draw was the culmination of a remarkable period of pressure by a side that suddenly found itself chasing the game. The Swiss survived a goalmouth scramble but succeeded only in clearing it a few yards beyond the edge of their own area. From there, Glenn Whelan let loose with a drive that crashed off the crossbar. Perhaps the visitors were as surprised as the rest of us for they never quite recovered their composure in the moments that followed and a deflected James McClean cross was ruthlessly put away by the striker whose determination to get his head to ball left Manuel Akanji helpless.

Between then and the end of the game - 10 minutes including five of added time -  Ireland seemed hell-bent on turning their one point into three. If they had succeeded the night would have been remembered for the frantic nature of their late onslaught but that would certainly have been harsh on a Swiss side that did most to make the running from the very earliest stages.

Ireland, as McCarthy said they would, sought to get at their opponents from the outset and though they clearly put everything into the effort, the problems associated with not pulling the high press off effectively were almost immediately apparent, with the visitors repeatedly working their way out of tight spots, then finding themselves running into large open spaces.

Some of what followed got pretty hair-raising from an Irish perspective, with the home side getting out of trouble by the skin of their collective teeth on a couple of occasions. For all that, Darren Randolph did not have too many saves to make as the Swiss struggled to produce shots to test him.

There would have been more had Shane Duffy not been on hand to block and the big Derry-born defender made his presence felt in the air too. As he cleared yet another cross by left-sided wing back Ricardo Rodriguez late in the first half, there was a definite sense that McCarthy’s men would have to more effectively stem the supply lines if they were to get through the night without conceding.

Scoring themselves seemed a little less likely at that stage, with the Swiss having 60 per cent of the possession in the first half.  However, their three-man defence was less than convincing on those occasions when Ireland ran at it and McGoldrick should really have teed Callum Robinson up for a clear-cut chance just before the break.

Robinson again provided the sort of lightness of attacking touch that the team has generally lacked since the departure of Wes Hoolahan and though he has some way to go before he looks entirely settled at this level, he continues to be a source of huge hope for the future.

Already, his invention is at the heart of most of the side’s brighter moves, with a backheel after  Whelan had headed a loose ball forward after a quarter of an hour setting Jeff Hendrick on his way. The Dubliner showed some quick feet before playing McClean through but Fabian Schär was on hand to smother the opportunity. Robinson had to be replaced just before the hour mark after signalling a problem to the bench.

Switzerland’s margin of superiority was growing by that stage and they really should have taken the lead when they played their way from the right into the very heart of the Irish area, only for Breel Embolo to lose his footing after Haris Freuler sent him clear barely 10 yards out.

Schär did rather better with a quarter of an hour remaining. The Newcastle defender had caused problems all night as he pushed forward, regularly unhindered, from the centre of Switzerland’s back three but his finishing had been poor.

Not this time. The visitors were allowed to play a string of first-time passes with Embolo teeing his team-mate up 15 yards out. The defence looked on as he placed the ball into the bottom right corner of Randolph's net.

Ireland regrouped and saved themselves but they will have to be better in Georgia, where they will be without the suspended Enda Stevens, and especially Geneva, if they are not to be swallowed up through the games that remain.