Once the next big thing, Jack Byrne's a bit older and wiser but still backing himself 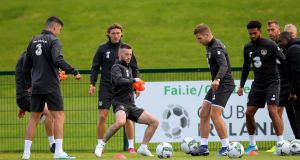 Ireland’s Jack Byrne and James Collins during training ahead of the friendly against Bulgaria on Tuesday. Photo: Ryan Byrne/Inpho

B being for Bulgaria and all that, Mick McCarthy is using Tuesday’s friendly to look at his back-up plan. Whether the manager will start with the Byrnes when it comes to handing out caps is another thing, but the midfielder Jack must be crossing his fingers.

The Dubliner is hopefully this just might be his day but not quite so bullish as he seemed about it all a few years back under Martin O’Neill when his confidence levels sometimes seemed to be off the scale; bolstered by the fact that he was on the books at the top end of the Premier League’s coming club and was regarded, in these parts anyway, as the next big thing.

“I don’t feel as if I said stuff back then that was anyway over the top or out of order,” he says now when asked about his first appearance around the squad back in March of 2016. “I was just saying how I felt at the time.

“I was a young kid and I was coming through the ranks at Man City at the time and I was doing quite well over in Holland and I was just saying what I felt. I think people asked me if I felt ready to play and of course you’re going to back yourself and say ‘yeah, I do’. I wasn’t saying that I was better than the players who were in, or that I should be playing instead of them. It was nothing like that. I just felt, like you always would, that I could back myself and I’d still do that to this day.”

That is certainly no more than McCarthy would expect should he decide to hand Byrne his senior international debut against the Bulgarians. The fact that he was the only player to miss out on the matchday squad when the Swiss were here last week would not appear to auger well for him but the manager has certainly spoken about using this match to give game time to those who have had to sit on the sidelines and watch.

There may be a hint of curiosity where Byrne is concerned too with McCarthy keen, perhaps, to see just how well the midfielder would cope with trying to play a passing game that has lit up a few of Rovers’ league and European encounters with and against seasoned internationals.

“I understand the level I’m playing at,” says the 23-year-old, “and I understand the level that some of the lads are playing at out here. It’s different. The standard of training is high, off the ball stuff and being on the ball, you have to look after your touch and your pass, I would probably get away with more at Shamrock Rovers.

“I’ve had a taste being in a few squads and I’m itching to get out but I understand that we have a good squad here and a lot of good players. If it happens, I’ll hopefully be ready and it’ll be a very proud day.”