Boost for Ireland as Jonathan Walters returns to training 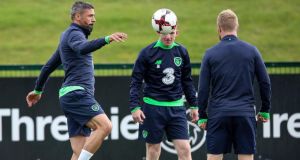 Jonathan Walters during Ireland training at Abbotstown ahead of the 2018 World Cup qualifiers with Georgia and Serbia. Photo: Gary Carr/Inpho

Jonathan Walters handed Republic of Ireland boss Martin O’Neill a boost when he joined his team-mates on the training pitch on Wednesday morning.

Walters has not trained fully since joining up with the squad after missing club Burnley’s 1-1 draw with Tottenham because of an ankle injury.

He took part in the open part of the session, but will be carefully monitored ahead of Saturday’s World Cup qualifier in Georgia and Serbia’s trip to Dublin next Tuesday.

Sunderland winger Aiden McGeady also trained after being given permission to arrive late following the birth of his son, but club-mate John O’Shea sat out with a tight calf muscle.